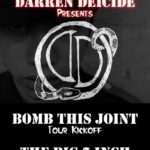 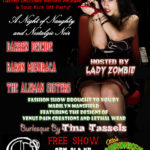 “Bomb This Joint” will be his first vinyl release

May, 2011 – Ever Reviled Records in conjunction with Pounding Pavement Music and Otto’s Shrunken Head announces a June 9th, 2012 release party for “Bomb This Joint”, the first vinyl record release from Darren Deicide.  The album will include a username and password for a free download of each song.  Pre-orders are now available at darrendeicide.com.  June 9th will also be the kickoff party for the “Bomb This Joint 2012 Tour” which will span from New York City to Chicago and many points in-between.