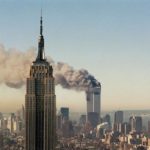 This anniversary of the attacks on the World Trade Center and The Pentagon by Islamic extremists fourteen years ago is a proper occasion for fellow rational, secular individuals to note the ongoing intolerance in the name of theism manifested this past year. Here are but a few amongst myriad atrocities. In January of 2015, the Paris office of the satirical atheist magazine, Charlie Hebdo, was attacked by two gunmen, killing twelve. 134 college students were massacred in Kenya by Shabbab militants in April. In Tunisia, over 20 tourists were slaughtered at The Bardo National Museum in March and in June, 38 were executed at a beach hotel. ISIS militants recently destroyed most of the 2,000 year old Temple of Bel in Palmyra—previously beheading the archaeologist  responsible for administering this site. Death seems to be a “gift” frequently offered by those of faith these days. They have other, more restrained “benisons.” To spite the SCOTUS decision allowing for same-sex marriage throughout the USA, there’s a rising backlash of discrimination branded as “religious freedom,” most recently exemplified by a bigoted Christian clerk whose attempts to block fellow citizens’ freedom were given support by two presidential hopefuls and a gaggle of cretins whose ilk would likely have been found bringing matches to witch burnings. Their proclaiming that the law of their “God” supplants the law of the land is echoed by fellow zealots the world over. The cavalcade of oppression, torture, rape, murder and destruction wrought in honor of fictional deities continues unabated.

Despite the current “domestication” of the major religions, we must not ignore the fact that they have extremist adherents and that their past is filled with similar and far more heinous acts than these current barbarisms. The usurpation or destruction of sacred spaces belonging to opposing faiths has been commonplace, and this is true for our species in all of its cultures, regardless of the chosen gods. Today, in parts of the world where they are not yet supported by governments, “true believers” may claim to be appalled at the mayhem noted above, yet often display smug contempt via their efforts to curtail the sovereignty of those who believe otherwise. History has shown that, when they are allied with the mechanisms of states and military force is in their hands, depriving the liberty and lives of people of differing or no faith is vigorously pursued as their holy duty. The rivers of blood spilled over millennia have now slowed to mere trickles, comparatively speaking, and there are many who react with shock and disgust at such physical violence. But enough of them would embrace alternative means for denigration as acceptable.

We secularists regard theism as a scourge used to subjugate non-believers and would gladly see it vanish from a society that we’d embrace as being civilized. It is sobering to recall that earlier successful cultures who considered themselves the height of human achievement worshipped their gods and sought the destruction of those who would not accept them. Perhaps mankind will find a way to pass beyond the apparent need for employing sanctified myths as justification for exterminating others? But those who hold to such “old ways” are passionate—they’ll die for their beliefs, first trying to make you die for your refusal to accept them. If rabid faith is rejected for the rotten disease that it is, then we might find that years could pass from this tragic anniversary when the tally of religion-caused dead would dwindle and perhaps finally come to an end.

My earlier piece dealing with the toxicity of those who feel they are manifesting the will of their deities may be worth your perusal: “The Murderous Madness of Theism.” On this solemn occasion, it is time that our passions are roused in opposition to those who kill and destroy for their gods, for such foul thinking and its consequent behavior must come to an end, lest the possibilities for a rational and equitable global society be forever lost.