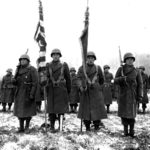 A SALUTE TO VETERANS!

Here in the U.S., today is Veterans Day, honoring those who served in our nation’s armed forces. We offer our sincere gratitude and admiration to all who have served in the militia worldwide to sustain—as well as attain—the precious privilege of liberty.

From the highest to lowest ranks, you have our thanks. Your gifts to us merit our abiding recognition for preserving the freedoms we all enjoy as we pursue our vital existence.

The image above is of Japanese Americans serving in the 442nd Regimental Combat Team in the 1940s. They served at a time when U.S. citizens of Japanese origin were being confined to camps under suspicion of possible allegiance to their nation of origin, then involved in armed conflict with the USA. These brave men, despite their ancestry and the unjust incarceration of their fellow Japanese Americans, willingly chose to embrace and fight for their adopted nation and its intended ideals. Their goal was both the preservation and restoration of the shared value of individual liberty for all citizens, despite their differing cultural heritages.

Those who put aside various religious beliefs and cultural prejudices—as well as injustices that might have been done to themselves and their kindred—to defend, preserve and enhance freedom as a fundamental principle for all in our society deserve our admiration for we benefit from their heroism. As a nation of immigrants it is essential that we judge people as individuals who make autonomous decisions based on their personal values and not condemn them as part of a collective. That challenging principle must remain fundamental to the USA, now and into the future.