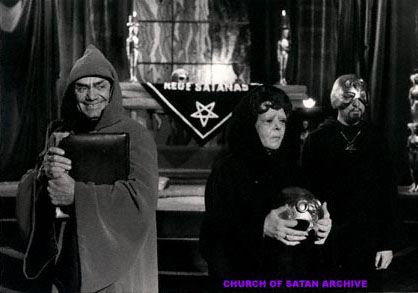 High Priest Anton Szandor LaVey was the consultant for this film as well as the designer of much of the decor. Here he is seen at right, wearing a brass helmet, while Ida Lupino, now a soul-less zombie, is at center and High Priest Corbis, played by Ernest Borgnine, grins evilly. This was the interior chapel altar set.

A widescreen image of the interior altar. Note the stained glass Baphomet amongst flames behind the stone altar.

High Priest Corbis before the altar, performing the Invocation to Satan. 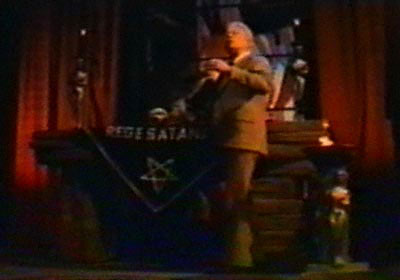 Eddie Albert at the interior altar. Note the candlesticks which are human figures, and the altar cloth with “Rege Satanas” and a simple inverted pentagram embroidered upon it. 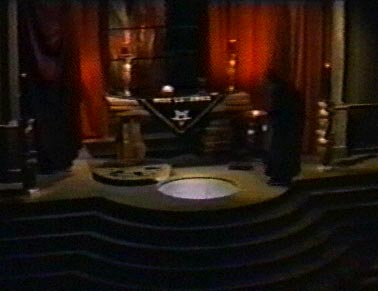 Another view of the altar, showing the steps up to it and the opened pit which hid the urn containing the souls belonging to Corbis. John Travolta is the robed acolyte at the right. 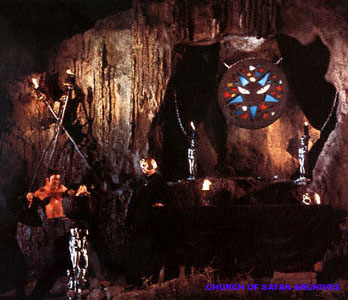 This film also had exterior ritual sequences, featuring a torchlit procession of black-hooded figures to this altar set. The stained glass Baphomet also doubles as the “manhole cover” in the interior chapel set, beneath which was placed the goat-shaped urn bearing the souls belonging to Jonathan Corbis. LaVey looks on as hooded acolytes drag a struggling William Shatner, towards his doom. 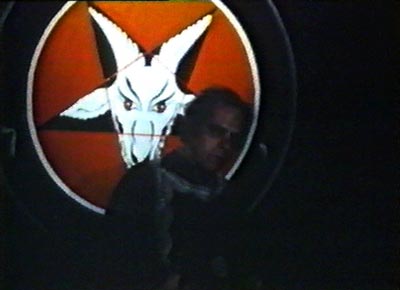 Anton LaVey was technical advisor for a film called Dr. Dracula (aka Svengali’s Second Coming) which featured a Satanic group headed by John Carradine, as well the reincarnation of Svengali, and a psychiatrist who is a vampire! 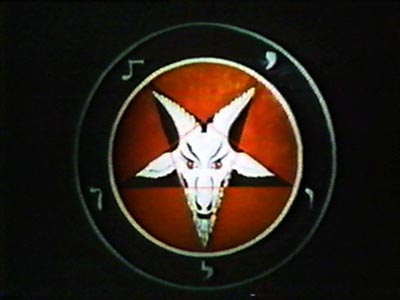 Another point of interest to this film is its score, which at one point uses music from the coronation scene of Mussorgsky’s opera Boris Godunov during a scene when the vampire is stalking a female victim. Above is the Baphomet Sigil which was mounted above the Satanists’ altar.

Altars of the Satanic Screen

The Satanism of Hammer Films