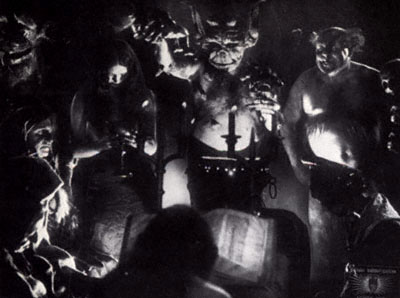 This memorable silent film from 1920 depicted the ill-treatment of those accused of witchcraft, picturing the torture and burning of the victims of The Inquisition, as well as creating vivid images of the fantastic debaucheries to which these wretches confessed under torture. Above is the Sabbat Altar, attended by the Horned One, holding an unbaptised infant. These images, conjured in the brains of Christian fanatics then forced upon those whom they branded as witches, have never been recreated with more detail than in this film. 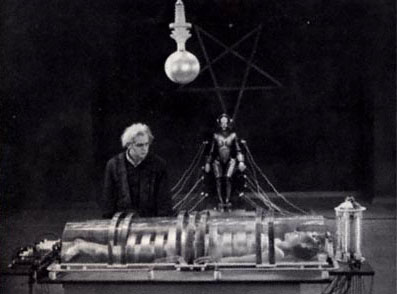 Fritz Lang’s amazing vision of the future, released in 1926, depicted the wedding of black magic and technology as mad scientist Rotwang creates his Robotrix. This is certainly a classic example of the techno-magic altar.

THE SEVEN FOOTPRINTS TO SATAN 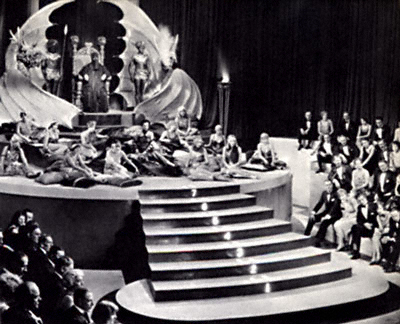 A. E. Merritt’s Satanic classic was made into a film in 1929. This sequence depicts the altar-like throne of the character who calls himself Satan, attended by his disciples. 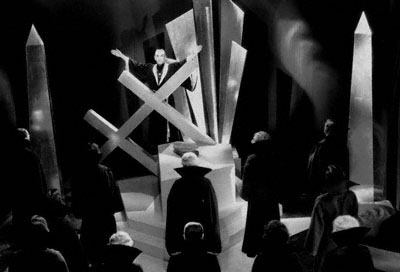 One of the first films to depict Satanists as powerful and influential, if perverse, individuals, this 1934 landmark was the first teaming of horror giants Boris Karloff and Bela Lugosi. Karloff, as Satanic High Priest Hjalmar Poelzig—acknowledged to be “one of Austria’s greatest architects” by Lugosi as Dr. Vitus Werdegast—heads a group of wealthy Satanists who meet at the dark of the moon to celebrate the Rites of Lucifer. Above you can see their amazing angled ritual chamber. Of note, Karloff’s character performs the adagio fromBach’s Toccata, Adagio & Fugue in C Major, BWV 564, at the organ which is just outside of this chapel. That piece is still quite worthy for stately passages in a Satanic ritual.

The Altars of Satanic Cinema