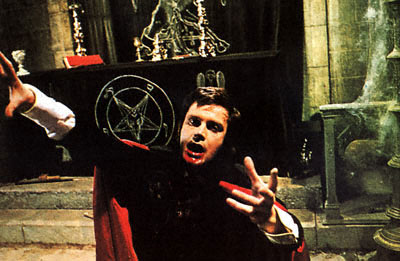 In the 1950s, England’s Hammer Studios began a new wave of remakes of the classic Universal Monsters. These low budget films had striking art direction and did not shirk from showing copious amounts of gore in lurid color. Satanism, in Hammer lore, was linked to vampirism, and the undead were looked upon as initiates who served the Prince of Darkness. Indeed, the second film to star Christopher Lee as Count Dracula was titled Dracula, Prince of Darkness and it featured a ritualistic resurrection of the fountainhead of the cult of vampirism.

Above, from Taste the Blood of Dracula (1969), a dissolute aristocrat leads four thrill seeking middle-class men into performing a Satanic Ritual intended to revive Dracula. The influence of the Church of Satan has been felt, as the set designers included the Sigil of Baphomet as part of the altar, albeit on the lower section of the platform. 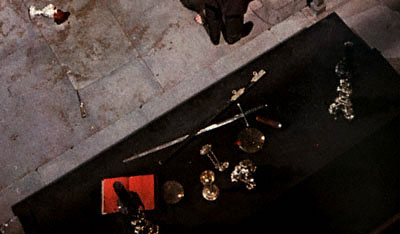 Above, the altar from Taste the Blood of Dracula (1969). We note the tools listed from The Satanic Bible, including a sword, silver candlesticks with black candles, a chalice, and red-leafed ritual “missal.” Also on the altar top are a vial filled with Dracula’s ashes and a “seal” on a chain which bears the name of the vampire king. 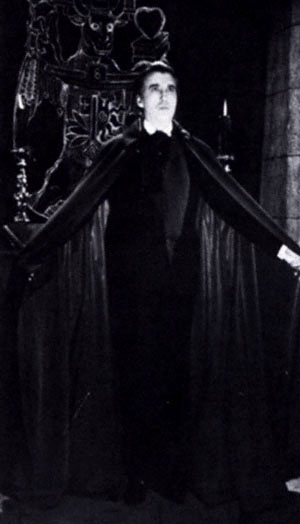 Arisen, by possessing the body of the aristocrat, Dracula stands before the altar from Taste the Blood of Dracula (1969). We can see behind him the horned figure which had the place of prominence. 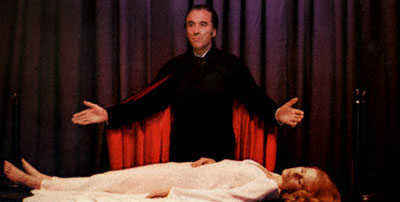 Hammer’s Dracula continued to be associated with His Infernal Majesty. In this scene from The Satanic Rites of Dracula (1973), a woman is used as a Satanic altar—guess somebody had seen Satanis wherein Dr. LaVey also spreads his red-lined black cape over the female altar! In the opening sequence to this film, there is a nude woman as the altar, but in the sequence pictured above, Dracula is preparing to initiate the daughter of the descendent of his nemesis, Professor Van Helsing, who is robed in white as would be someone about to be baptised in the tradition of the Church of Satan. Also in this ritual chamber was a circular black table upon which the Sigil of Baphomet had been painted in white. 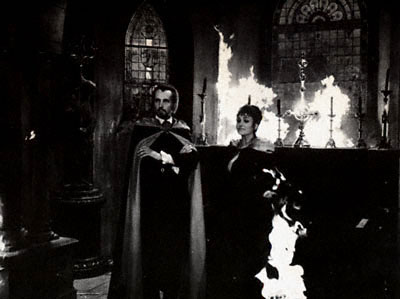 Hammer also did several tales based on Lefanu’s Carmilla. In Lust for a Vampire (1971), a pair of Satanist vampires resurrects Countess Karnstein. This is a still from the finale, wherein the Satanic chapel has been set ablaze by the local townspeople—those peasants were always revolting! The vampires have no fear, as fire cannot harm them. Note the black-draped altar, this time bearing an inverted cross between the black candles.