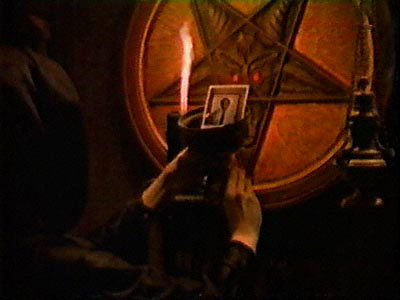 This 1981 TV movie featured a battle between two witches, one Satanic, and one “goody-goody”—a new age-type gal. All is obvious, as the “bad” witch wears makeup, a black hooded-robe, gets whatever she wants, and has a very nifty Satanic altar in a closet in her bedroom. She is also smarter and far more powerful than the dowdy, shy, good witch. Here she performs a destruction ritual against a teacher who intended to fail her jock boyfriend. As she ignites his photograph, cross cutting shows the teacher’s car exploding into a fireball! 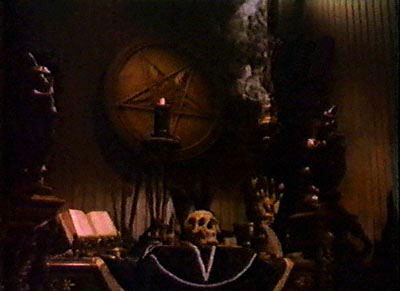 Here is a close-up view of her altar—quite a set-up! 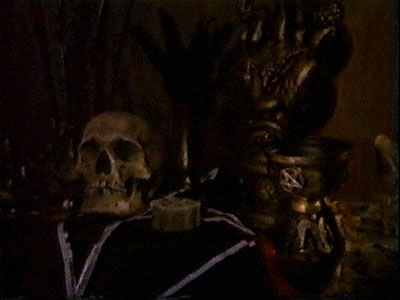 Here is another view of her altar paraphernalia, including a fine chalice. 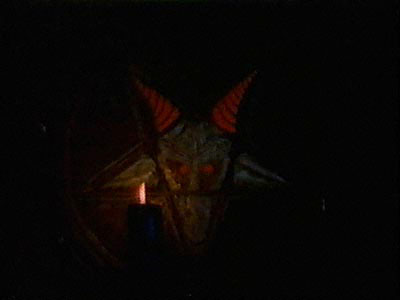 The altar had quite a fine version of the Baphomet, which lit up in anger, then burst into flames, when the ritual chamber was invaded by the good witch and her wimpy boyfriend. 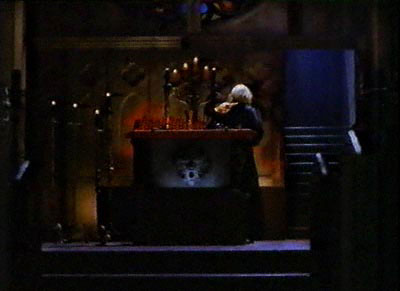 Part of ABC Television’s Mystery Movie anthology series, this 1989 film featured Lou Gosset Jr. as an archaeologist who helped solve crimes (who had a daughter named Zeena!). It took its cue from Maury Terry’s book about the Son of Sam killings, and posited a New York area Satanic cult which sacrificed children to make snuff films. They met in a ruined church, the walls of which were covered with grafitti. Above is the main altar. 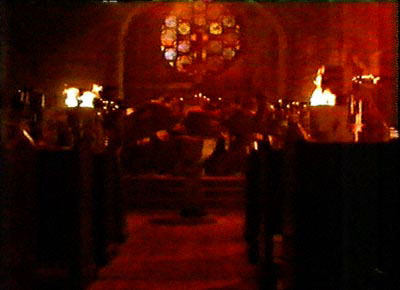 Above this altar hangs a large inverted cross, and before it a baptismal font is used for burning incense. 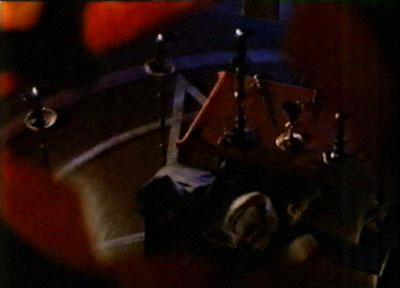 A close up of the altar itself, which was placed in a magic circle. 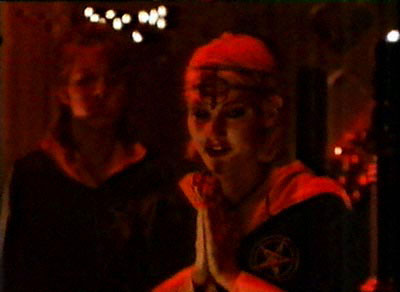 What outrages Satanists about this film was that they not only used the Sigil of Baphomet on the robes of this cult (note the inverted cross in a circle as her headpiece), but during the scene wherein the cultists intended to sacrifice a child, the woman who served as High Priestess read a litany taken from Anton LaVey’s Satanic Baptism Rite for children. This rite is a celebration of the carnal purity of children, and they used it as a preparatory for murdering a child!

The series went nowhere, having, I think, one other installment which focused on VooDoo. We weren’t surprised.

The Altars of Satanic Cinema

The Satanism of Hammer Films