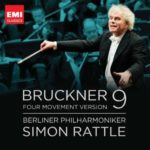 Anton Bruckner died before he could complete the final movement of his Ninth Symphony, a work filled with struggle, anguish, terror, and majesty. For many years only the first three movements have been regularly performed. The peerless Berlin Philharmonic lead by Sir Simon Rattle, a potent interpreter of late romantic scores, now offers us the full symphony with the finale realized by a brilliant team of “forensic” musicologists.

Nicola Samale and Giuseppe Mazzuca began the reconstruction work over 20 years ago. Later they were joined by John A. Phillips and Benjamin-Gunnar Cohrs, the latter two having taken the lead in more recent refinements to the score. The SPCM team have labored with exacting skills to bring you the last testament of a great composer.

At the time of his death, visitors to Bruckner’s apartment were allowed to take chunks of the manuscript of the finale as souvenirs, and so the score as it has come down to the present has gaps where folios of manuscript were removed, and that includes the very end of the work. Fortunately, Bruckner was a very methodical composer who wrote on pages which had pre-ruled amounts of measures so there is a way to roughly determine the amount of missing music in the gaps. With an understanding of his late compositional style and working from the sketches, the possibility exists to make informed judgments about replacing what is missing. There is even a written account of what the very conclusion was like, since Bruckner played it for a friend. He was not the sort who could write down music from hearing it, so his statement is cryptic, but it lead the SPCM team to create a triumphant coda from the sketches that brings this “purgatorio” of a movement as well as the entire symphony to a deeply moving and satisfying conclusion.

The goal of this team is to present Bruckner’s finale as close as they can determine to what he intended it to be at the time of his death. As missing manuscript pages turned-up, they incorporated them into their score as it developed over many years. The form of this finale is complex, dramatic, and exciting. And the performance by Rattle and the Berliners is committed and detailed. I heard the live concert broadcast from Berlin and also attended their performance of the work in Carnegie Hall, and I think that it is well captured on this CD.

Bruckner’s Ninth Symphony employs his most daring harmonic vocabulary in a composition that cannot fail to move anyone sensitive to orchestral music which embodies the struggle of a great artist to create the capstone of his life’s work. If you had been thinking of listening to any of Bruckner’s symphonies after reading my description of his work in my book, now is the time to take the plunge with this recording of his final masterpiece.

There have been other attempts to complete this finale, but I find this score to be the one that sounds most like it came from Bruckner’s own hand from first measure to last. I have read the very convincing materials by Phillips and Cohrs which detail all of their choices in their efforts and the solid reasoning behind them. No other attempt at completing this movement has a similar pedigree. Nor do any other efforts present such an inspiring listening experience. Click the image above or this link to purchase a copy from Amazon.com.