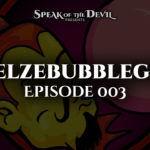 Speak of the Devil Presents Beelzebubblegum, the anti-game show for the anti-Christian in all of us. Tune in live for a chance to play and win at sinnin’! That’s right, the more answers the judges approve of, the more levels of sin you are awarded until the final head-to-head battle with Bowser* himself!

Beelzebubblegum is the brand new game created by sinners, for sinners… and the gays, straights, queers, bros, sluts, greasers, jets, sharks and n00bs.

*Beelzebubblegum has no connection with Nintendo, Nintendo Corp., Mario Bros. or Bowser. There is no actual Bowser fight during the game, or after. Point in fact, Bowser is a cartoon and video game character who does not exist in the real world, so having to clarify this means you are a dimwit and should not be trusted with any sharp object up to and including a spork. To clarify for the dimwits, a spork is a combination of a spoon and fork.

YouTube has restricted my ability to live stream due to last weeks episode breaking community guidelines. They told me someone flagged it as inappropriate.

I believe it was due to the graphic fetish discussion at the end of the show. Know that I will no longer be discussing fetishes.

Give a Rating & Review