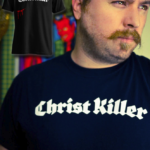 In his lecture The Great Satan, Magister Kevin I. Slaughter (pictured) discussed his love of iconoclasm:

“If I were Jewish, I’d occasionally wear a T-Shirt with the words Christ Killer on it.”

He then designed the official Christ Killer T-Shirt, and summoned Reverend Ashley S. Palmer to make them.

Though still not Jewish, he has a hell of time wearing it, and so can you!

These words from Dr. LaVey are pertinent to the “Christ Killer” concept and ASP Apparel in general:

“…We as Satanists, have an affinity for certain elements of both Judaism and Nazism… Hereditary Jewish culture is a perfect springboard for anti-Christian sentiment. The Jews have a foot in the door as the only historically consistent scapegoated enemies of Christ… Persecution of Jews occurred largely because of ‘majority rules’ populist concurrence that Jews killed Christ… To be a Satanist is, by association, already be aligned with the universal devil Jew… Instead of declaring that Jesus was a nut and a shit disturber and he got what he deserved and we’d do it all over again, they decided the infiltrate the Christian world and survive that way… It will become easier and more convincing for any Satanist to combine a Jewish lineage with a Nazi aesthetic, and with pride rather than with guilt and misgiving… The only place a rational amalgam of proud, admitted, Zionist Odinist Bolshevik Nazi Imperialist Socialist Fascism will be found -and championed- will be in the Church of Satan.”