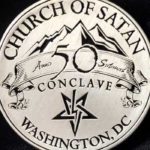 Now that we’ve successfully gathered and again dispersed, we can let the world in on one of our secrets—members of the Church of Satan from around the globe met in Washington, D.C. from May 1-3 to mark our Year 50 Anno Satanas. We are not a congregational organization, as explained by Magister Bill M. here, and so this conclave was a rare celebration of this important landmark in our history. We chose this city as it contains many monuments to the secularism and free thought held dear by the Founding Fathers of the United States. It was thus a suitable setting for we who treasure the principles of liberty and the separation of church and state.

Our members enjoyed a club night featuring bands headed by Church of Satan members: NATHAN GRAY, GASH, and DANSE DESADE. We had over five hours of “salon” presentations wherein our productive adherents shared their many ways of moving the world. Amongst those included were people involved in book publishing, music, ecological activism, sculptors, entrepreneurs, motivational speakers, scholars of religion, and an ordained attorney presenting his successful efforts towards legal recognition of our Priesthood in his home state. Some of the speakers offered messages meant solely for our gathering. Others had presentations that have been captured on video and we’ll offer highlights of their talks in the near future on this site.

After a convivial banquet during which commemorative coins created by iSatanist were gifted to the attendees, we were serenaded by blues guitarist DARREN DEICIDE and wowed by the prestidigitation and ventriloquism of the extraordinary CARDONE. Finally, I gave a keynote address to the crowd which brought a rousing finale to the evening’s festivities. Following a delightful Sunday brunch, farewells were said and, with new connections made, we returned to our “secret fortresses” around the world.

Our esteemed Reverend Merciless brought his extraordinary talents to make this a memorable assembly. We salute him not only for that, but for his release through his Rabid Crow Arts & Graphics of a hardcover edition combining the original English language texts of Dr. LaVey’s seminal companion books: The Satanic Bible and The Satanic Rituals. This was a perfect capstone for a memorable conclave. We have all been amazed and energized by what our fellows have brought into being.

Ever forward and Hail Satan!