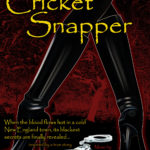 In honour of this day, 11 April 2016 c.e., on what would
have been Dr. Anton Szandor LaVey’s 86th birthday, and as a tribute
to Doctor LaVey and High Priest Peter H. Gilmore for bestowing upon us the
genius of their music for our first film, Phoenix Rising Band~Films is
releasing Cricket Snapper first to
any and all Church of Satan Citizens and to their closest of friends and kin.

You will find the link below, my fellow citizens. Kick back,
crack open the bubbly, and throughout the month of April and on to
Walpurgisnacht, celebrate the life and music of a groundbreaking musical genius
and world iconoclast philosopher…perhaps with our little
diamond-in-the-rough-sex playing in the background.

In honour of our 50th, this film is now available
free to you and all our fans via the link below. If we play our cards right,
She may be flying to Berlin this year for a European premiere. Feel free to
share Cricket Snapper now on
facebook, Twitter, yada, yada, yada, if you like – as we have shared this with
you now – and my long suffering cast and crew and I would be eternally grateful
for it too.

A special round of applause and thanks goes out to Chris X
at Reptilian Records and Scapegoat Publishing for allowing us the gratis use of
Dr. LaVey’s fabulously satanic music and making Lawson Welles only the second
director after Krispin Hellion Glover to have Dr. LaVey’s music in a film – to
him, we are eternally grateful.

And stay tuned to our facebook page below for more news and
links for Cricket Snapper as well as the
upcoming Schreckenfaust – The Hunt for
Hitler’s Vampire book/short film series, the story of a Jewish Van Helsing
hunting down a renegade Undead SS General who has absconded with the legendary
Spear of Destiny. You may recognize one of the Mossad agents on his
tail…codenamed Zaharoff.