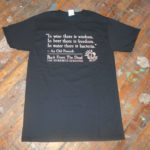 To celebrate the one year anniversary of the premiere of “Back from the Dead: The Harsimus Sessions”, “Back from the Dead: The Harsimus Sessions” shirts will be on sale for $5 only this month of February. T-shirts come in small, medium, and large size and sport the proverb “In wine there is wisdom. In beer there is freedom. In water there is bacteria.” They are available exclusively at here.

In 2013, the historic Jersey City and Harsimus Cemetery opened its gates for Darren Deicide to perform three songs for a series of live videos entitled “Back from the Dead: The Harsimus Sessions.” Three live performance videos of Darren Deicide’s songs “Devil Woman Blues”, “Dance of the Demon Rag”, and “Hudson River Hangover” were filmed amongst this setting.

Jersey City, NJ – Darren Deicide and McGinley Square Pub announce the launch of “Hokum!”, a new monthly showcase featuring original neo-Americana music in a unique setting. “Hokum!” will take place the first Sunday of every month in the back room of McGinley Square Pub, an intimate environment without a PA system. Music will include touring acts as well as locals. Unique and formal attire is encouraged. There is a suggested minimum donation of $5 that goes to the artists.

McGinley Square Pub, located at 755 Montgomery St. in Jersey City, was formerly operated under the same name. Prior to that it was named after the Orson Welles’ film “Citizen Kane.” McGinley Square Pub was saved from abandonment and reopened in May 2015 as a local craft beer bar. “McGinley Square Pub, which makes a point not to offer major name beer brands, instead opts to spotlight local brewers like 902 Brewing Co. based in Hoboken”, reports The Jersey Journal. The owner draws inspiration from one of the pub’s mottos: “No Wi-Fi: Talk to each other.”