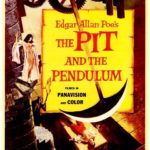 Episode 34: POE’S THE PIT AND THE PENDULUM

The Devil’s Tuning Fork: Miguel
Guerrero Sr. and I have chosen the following tracks for this “Poe-etic”
episode: “Alone”
is performed by none other than Michaelanthony Mandrake. Miguel Guerrero Sr.
performs “Annabel Lee”. And we play “My Lost Lenore” from Tristania’s 1998 album, Widow’s Weeds.

The Devil’s Workshop: Keeping
the “Poe-etic” inspiration flowing, we have John Dickson Carr’s radio
adaptation of “The Pit and the Pendulum” written by Edgar
Allan Poe for Suspense. It first aired on November 10, 1957.
It starred John Hoyt, Ellen Morgan, Helen Morgan and Jay Novello. Vincent Price starred as our protagonist.

The Devil is in the Details: Miguel
and I spoke in regard to his discovery of Satanism,
satanic jewelry, his hobbies and his favorite creations.

Mail Bats: Miguel
and I answer a question from one of the listeners: “When religious people pray,
they, more often than not, do not get what they want, is it the same for you?”
The short and resounding answer is no. We typically get what we desire. Miguel
and I elaborate on why this statistically holds true.

Whiskey Bent and Hell Bound: Miguel
and I uncover some minimalistic cocktails which include the following: “Scotch
Milk Punch”, an unnamed “Eggnog Grog” (I call it ‘Cthulhu Christmas’), and an
absinthe and champagne cocktail known as “Death in the Afternoon”.