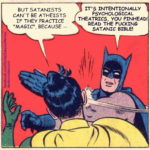 On this day of Earth Day, an international celebration of environmental awareness and the ecological sciences, it may be worth re-stating Satanism’s stance on science itself.

Science has always been given the Devil’s name, as its discoveries have time and time again debunked unfounded spiritual dogma. It should therefore come as no surprise that the Church of Satan takes a pro-science stance, embracing skepticism and critical thinking, the antitheses of faith. Satanism is an explicitly carnal religion, taking Satan as an apt metaphor for the primal drive and life-enriching ideals which religions have traditionally tried to condemn.  Some Satanists may find esoteric appeal in exploring tales of the bizarre and supernormal, but at the end of the day we still reject mysticism and notions of the supernatural.

This is a position which seems to go over the heads of many people who’ve never bothered to really learn about Satanism (including people who ironically parrot the popular mantra of “I only believe things based on evidence”), and apparently get all of their information on “Satanism” instead from Christian scare propaganda and tacky horror movies.  Like all religions, Satanism does employ symbolism, ritual, and ceremony.  However, unlike other religions, we explicitly acknowledge these as human inventions, namely psychological tools for personal empowerment or celebration of an idea.  We know that our invocations to “Satan” or “The Infernal Names” within the ritual chamber are pure psychodramatic fantasy said in an established subjective setting, not calls to an some actual supernatural being.  We’re Satanists, not devil worshipers.  As The Satanic Bible states about empirical truth versus fantasy, “Each is necessary for the other to exist, but each must be recognized for what it is.”

As science made great advancements in the 18th and 19th centuries, it was thought that belief in deities and other supernatural notions would become a thing of the past.  We all know that this unfortunately isn’t the case.  As great as the Internet has been for disseminating knowledge, it has also served as a place for irrationally confirming emotional biases.  Too many people are naively triggered by sound bites, and don’t want to take the time to really read or critically research anything.  On social media sites like Facebook and Twitter, people will blindly share whatever click-bait headline appeals to their emotions, without stopping to see if the story is from a satirical news site, has any evidence to it, or if the headline is at all reflective of what the actual linked article is about.  Not surprisingly, the concept of research is also lost on the “journalists” who write many of these news stories.  Conspiracy theorists mistake high quantities of YouTube clips as “evidence” for their crazy beliefs.  And there’s still no shortage of young-Earth creationists who were apparently absent from eighth grade science class on the day the teacher taught the difference between “theory” and “hypothesis”.

As Satanists, we abhor mystics and the intellectually lazy, and recognize that the scientific method is the best means of ascertaining truth about the empirical world.  So on this Earth Day, I applaud the scientists who continue to advance the world through their discoveries.  Hail Science!