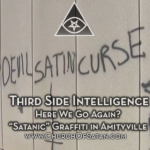 This morning I awoke to news stories proclaiming that three churches located in North Amityville in Suffolk County on Long Island were vandalized with SATANIC GRAFFITI. Apparently, some time Saturday night, a vandal scrawled on the external walls of the Amityville Full Gospel Tabernacle, the Shaw Temple AME Zion Church, and the Zion Gospel Church, all close to one another. Oddly, none of the major news reports, which include ABC’s Eyewitness News account, show any of the graffiti. However, it was explained in other reports that the offending graffiti was painted over before the Sunday morning services. I did find one image posted online in the past few hours of an upright pentagram in a circle painted on a set of double doors. The footage shown on ABC, including an interview with Pastor Willard Price of the Zion Gospel church, includes an image of doors that may be from the same building, but the graffiti had already been overpainted. The report states that the police are calling this “satanic graffiti” and that it is being investigated as a hate crime.

During my search for additional images of this so-called “satanic graffiti,” I discovered a report that there had been another vandalism incident five days ago in East Meadow Long Island—roughly ten miles west of last night’s crime—which was being labelled the same way. CBS News reported that the New Covenant Church of East Meadow was vandalized with “satanic worship symbols.” Their pastor, Rob Taormina, states in an interview that “if somebody came and painted your house up with satanic symbols I think you’d be disturbed, too, ‘cause you don’t know who they are and you [don’t] know if they’d come back.” In this case, a glass vestibule door was smashed as well.

I’ve long been a consultant for law enforcement, assisting during investigations of crimes using unusual symbols, and I’ve not yet been called in on either of the incidents mentioned above. However, upon examining the news story images, what stands out to me immediately is that in both towns a form of pentagram was drawn which has one point up. This is not a symbol used in either Satanism or Devil worship—where two-point-up pentagrams are employed—but is found in the neo-pagan religion of Wicca in its various forms. The East Meadow images show inverted crosses and the word “Satin” which shows that the writer is either illiterate, or into shiny fabric. Also the words “DEVIL, WITCH, SPELL, CURSED” as well as a “frowning face” emoji are crudely inscribed.

Now, if the criminal doing this vandalism was actually knowledgable about Satanism or Devil worship, then I think the pentagrams would be the proper sort, not the neo-pagan version we see here. Also the incorrect spelling of “Satan” and simply the use of terms popularly associated with witchcraft lead me to think that the person who did this is most likely a Christian who is going by fairly typical misprisions regarding these non-Christian religions. This hateful person wanted the people attending these churches to feel that this crime was done by an adherent of Satanism, Devil worship or some form of witchcraft involving reverence for The Devil—like you see in horror films or in those books published by evangelical Christians which spread grave misinformation about non-Christian religions.

This sort of thing was common during the years of the “Satanic Panic” back in the 80s-90s, wherein similar graffiti—often accompanied by “666” and symbols used by various anti-Christian metal bands—was found on building walls and under bridges and so on. Back then, such things were likely done by metal fans who shared the anti-Christian biases of the bands they followed or by disaffected youths dabbling in the sort of “satanism” they saw being depicted by the media as a form of rebellion. We deal with the meaning of 666 and other symbols on our web site.

These two recent incidents look more to me like they were done by a Christian who wants people to think that somebody associated with a religion employing these symbols has a grudge against these churches. It is clear to me that, whether Christian or not, the perpetrator is ignorant of Satanism, Wicca, and Devil worship. Whatever hatred is in the mind of this criminal, the deed was done by someone who is not an adherent of Satanism, Devil worship or Wicca, and simply wants to blame their own anger on these other religions while terrorizing the congregations of these churches.

Even when vandals do use symbols that reflect Satanism, since we have a philosophy that does not condone criminal actions it should be clear that anyone committing such crimes is not a Satanist, or if self-identified as such is acting in a manner contrary to our belief system. This article from 2008 covers this topic rather well.

Considering the past lunatic obsession with a manufactured conspiracy of predatory “satanists” out to get people, it is incumbent upon both law enforcement and the media not to jump to unwarranted conclusions by proclaiming this is “satanic graffiti” when Satanism is not its source. The Church of Satan is a 50 year old, legally incorporated religious organization with members worldwide who abhor this sort of crime. We’ve been through one hysteria—begun by evangelical Christians and taken up by misinformed law enforcement agencies and sensationalist media outlets—that caused harm to many innocent people. We do not want to see that madness rising again, abetted by uninformed or biased forensic analysis and reportage. I trust that this vandal will be apprehended via diligent police work based on an accurate grasp of the deeds done and receive due punishment for these crimes.

‘If You’re Setting Fire To Churches, You Are Certainly An A**hole, But You’re No Satanist’ —Interview from 2008 debunking church vandalism as being Satanic.