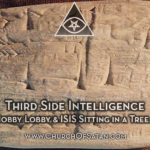 Theists wanting to control what those around them may do is not a new thing, nor does any religion have an monopoly on that behavior. Openly call it Sharia or thinly veil it as Religious Freedom, the motivation and goal is the same—using whatever power you have at your disposal to force those around you to comply with your religion’s beliefs. One need look no further than at the bloody history of Christianity’s fractious denominations or at the replies we receive on Twitter to know that—if they thought they could get away with it—directing violence at people not sharing their beliefs would fast be on the menu. Hell, you can look at recent domestic terrorist attacks in the US and see that many of the faithful don’t even care if they can get away with it. But, as groups who think they have God-given blessings, they grab for any available form of dominance whenever they can to assert their righteousness.

Christian extremists think of themselves as polar opposites and antagonists to Islamic extremists—and that conflict goes back to The Crusades, when Europeans invaded the Middle East, ostensibly to protect their Christian heritage. The mercenary soldiers looted art and artifacts and stole land from the local Muslim infidels, raping and pillaging with the support of their clerics. And of course there were Islamic invaders of Europe who did the same thing to those they overwhelmed. We know these theists are all cut from the same cloth and that this proposed separation is only about particular holy books, not methodology.

Anyone who has been watching this space knows Hobby Lobby as the Christian-owned company that fought in court for the right to avoid paying for some insurance-covered employee health benefits due to “deeply held religious beliefs.” More interestingly, they’re back in the news for smuggling ancient Iraqi artifacts into the US. They claim an interest in amassing such things to bolster their belief in their scriptures. Now that they’ve been caught, Hobby Lobby has agreed to pay a sizable fine and will forfeit all the artifacts to their nation of origin which has many applauding that justice has been done. Yet that ignores a crucial piece of this story—from whom were they purchasing these looted artifacts in the first place?

That’s not really a question so much as a way of revealing an answer that we already know. They were in all likelihood buying them from ISIS. The Islamic State ransacking of historical sites is well documented, as is their destruction of historically important art and architectural landmarks. What’s also known is that they also sell-off anything they can to help fund their other terrorist operations. Following that math to it’s logical conclusion results in the extremist Christians at Hobby Lobby directly financially contributing to ISIS coffers. That forms of theism mutually hostile towards one another collude here is shocking to the naive but unsurprising to objective observers as these believers have all often shown their willingness to compromise supposedly “deeply-held” ethics if it means furthering their broader agendas. Sadly, this behavior is standard practice for the oh so publicly pious and we expect many would find it disgusting and in the case of supporting terrorism, an act of treason.

As Satanists, we are not surprised to see these religious extremists in bed with each other. But we do not endorse that these practices should continue, as they lead to ongoing subjugation of non-believers. We do not differentiate between which book of fables or which imaginary celestial friend is used to justify whatever form of oppression is being forced on others. We object to all theism-based social control, legally backed or otherwise. And we recognize these opportunistic hypocrites for what they are, and continue to stand in opposition, advocating for a truly secular society in which all are held accountable for their actions.