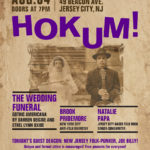 Hokum Productions is the flagship for new, alternative, and strange music and culture in Jersey City, NJ and is making its debut at the newly renovated Bobby Dee’s, under new ownership by the former owners of defunct Jersey City venue Lamp Post Bar and Grille. Featured at the show will be The Wedding Funeral (the new gothic-Americana project by Darren Deicide and Ethel Lynn Oxide), Brook Pridemore (New York City anti-folk mainstay), and Natalie Papa (Jersey City-based folk rock singer-songwriter). The guest deacon will be New Jersey folk-punker, Joe Billy. Unique and formal attire is encouraged.

The show is a suggested donation of $10. Show will begin at 8pm. Bobby Dee’s is located at 49 Beacon Ave. in Jersey City, NJ.