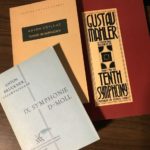 Magister Gene Lavergne honored me by having me on as his guest co-host for the mammoth 400th episode of his classical music podcast, Vox Satanae. Our discussion explores dark emotional narratives as found in two operas, three symphonies and a film score which in part was derived from a concert work.

We begin with excerpts from Richard Strauss’ ELEKTRA, in which the lead character’s drive for vengeance brought Strauss to the heights of dissonance and cacophony found in his works. This is followed by Bartók’s BLUEBEARD’S CASTLE, in which the brooding, murderous Bluebeard welcomes his inquisitive new wife Judith to explore his domains—both architectural and psychological. We conclude the first part with the final minutes of the Adagio from Bruckner’s Symphony No. 9 in which a dissonant “crisis chord” shatters the movement and leads to a consolation that is often used to conclude the work, even though there has been an excellent speculative version of the finale that ultimately brings the long-sought and well-deserved transfiguration desired by the composer.

The second part begins with Mahler’s 10th Symphony, as completed by Deryck Cooke, which in part concretizes the composer’s struggle to deal with conflicts in his marriage as he worked to move past the farewells he offered in both Das Lied von der Erde and his 9th Symphony. It too contains a powerful “crisis chord” in both the opening and finale movements. We move on to Bernard Herrmann’s 1936 composition, a Sinfonietta for strings, parts of which he employed when scoring Hitchcock’s PSYCHO in 1960. We listen to the version of the Sinfonietta from 1975 as well as a suite of cues from the film score. We end with the Symphony No. 3 by Aaron Copland in a recent recording by Leonard Slatkin and the Detroit Symphony Orchestra which performs the originally published version that includes parts of the finale which had been cut at Leonard Bernstein’s instigation. Interestingly, Herrmann was part of Copland’s American composers group around the time he wrote his Sinfonietta, which seems inspired by works of Schoenberg and Berg, who were disciples of Mahler. Copland’s final symphony was a summation of his compositional prowess and one can hear some Mahler influences—again a powerful “crisis chord” halts the fourth movement before moving on to a triumphant peroration which intertwines the Fanfare for the Common Man, which initiates and permeates the finale, with the main theme from the first movement.

Our listening journey brings us through very dark emotional landscapes to the final grandeur that Copland so deftly captures in what is a splendid and monumental symphony. I trust you might spend some time listening to our discussion and being as moved as we are by these extraordinary compositions.