Do good to all men? Turn the other cheek? Love your neighbor as yourself? "Why would anyone want to do that?

" asked Peter Gilmore, local magister for the Church of Satan. Gilmore stepped onto the Catholic campus of the College of Mount St. Vincent in Riverdale last week to deliver a decidedly unorthodox lecture on orthodox Satanism before a crowd of 200 skeptical but open-minded Christians. Considering the subject matter, the lecture, sponsored by the college's Angelicum Club, was surprisingly low key. Club Vice President Elaine McSherry, a 20-year-old Roman Catholic, said the goal was to obtain information. "What better way to understand something than have it done on a college campus?

" she asked. Said Gilmore, whose title of magister is the equivalent of archbishop: "If you're a Satanist, you're not looking for a savior. This is a religion that accepts man as he is without trying to change him.

" The audience alternated between laughter and gasps as Gilmore explained some of the basic tenets of his religion, as outlined in Anton LeVay's "The Satanic Bible.

" Some of the beliefs espoused by Gilmore were expected. "Kindness to those who deserve it instead of love wasted on ingrates," Gilmore recited. "If a guest in your lair annoys you, treat him cruelly and without mercy.

" Audience members stared at each other, then let out disbelieving laughs. "The cardinal sin is stupidity. Too bad it's not painful," Gilmore said. "It's not as bad as ignorance, which can be cured.

" Other beliefs were a bit surprising. "Satan is the best friend the Church has ever had, as he has kept them in business for so many years," said Gilmore. More than one student may have had to refrain from clapping when Gilmore spoke those words. In actuality, Gilmore said, Satanists don't believe in a personal Devil or a personal God. "Satan is an archetypal symbol of the rebellious one," he said. "And the force that science defines as entropy [inevitable and steady deterioration], we would call that Satan as well.

" Said McSherry: "I was surprised to hear they aren't dualists [believers in a good God opposed by an equally powerful, evil Devil]. Besides that, nothing he said surprised me.

" Some students asked if Satanists harm anyone or anything children and animals in particular to perform their rituals. "The answer is NO," he said. "With a capital N and a capital O.

" "I don't believe him," said Gene Cherubin, a 23-year-old junior whose last name means angel. "As a born-again Christian, I believe that they hurt people during their rituals. Maybe this man is from a group that doesn't sacrifice people, but Satanists do.

" "There's this stereotype of a wild conspiracy, an underground network breeding babies for sacrifice," Gilmore said. "FBI and other investigations have shown that that kind of stuff is not going on.

" The idea of sacrifice is more at home in Judaism and Christianity than it is in Satanism, he insisted. There were teachings which no one present knew how to respond to. For example, Gilmore said society should use modern technology to "create artificial companions. It would let off a lot of tensions.

" "How does someone react to that?

" asked fine arts chairman Enrico Girodano, who applauded the Angelicum Club and the college for providing an atmosphere where a lecture like this could take place. "The students were very critical," said religion Prof. Edward Zukowski, faculty adviser for the Angelicum Club. "They perceived inconsistencies in what Mr. Gilmore said and they pointed them out.

" For example, one student said Satanism, for all of its rebellion against "rules and regulations," has its own set of rules that forbid sex with minors. After Gilmore said women can and should easily be able to use their sexuality to manipulate heterosexual men, one woman charged that Satanists were using reverse psychology to get away with treating women as sex objects. "Who cares if men see you as a sex object, as long as you're getting what you want?

" Gilmore countered. "What they think of you is their problem, not yours.

" As for holidays, Gilmore made no mention of Halloween. He did identify days that were unique in nature equinoxes and solstices, specifically. But the day that takes precedence over all others in the Satanist religion is . . . "Your birthday. That's when you can treat yourself like the god you are," he said. Gilmore didn't win any converts that night (McSherry said the religion was "too selfish" for her tastes), but Satanism isn't a religion one converts to anyway, Gilmore said. "We believe that you're born that way," Gilmore said. "Satanism is patterned after human nature. What happens is you realize it's what you are. It's not a conversion; it's a realization.

" Gilmore said he realized he was a Satanist after reading "The Satanic Bible" when he was 13.

Read the original article on nydailynews.com

Sex and the Devil: Satan Really Wants You

Occult In America: Satan in the Suburbs 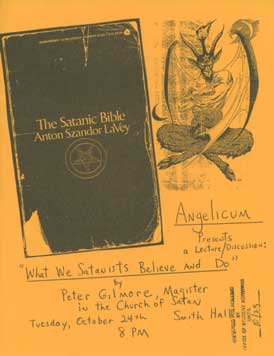