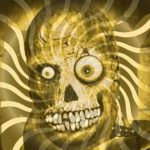 Jimmy Psycho has completed the recording of his next project, The Abominable Dr. Psycho. The release, titled “Musica ex Mortuis, Vol I” is a collection of classical music’s scariest songs played on a pipe organ.

The name “The Abominable Dr. Psycho” is direct tribute to one of Jimmy’s favorite films, “The Abominable Dr. Phibes”, the 1972 cult horror-comedy that starred the great actor Vincent Price in the featured role. The original spark for this project was ignited after watching the opening scene from the “Dr. Phibes” film. “Musica ex Mortuis, Vol I” translates from Latin to English as “Music of the Dead, Volume I”.

Psycho comments: “This record took a long, long time to record. Some of these songs I started working on back in 2012. At that time, I became incredibly busy with my lounge music. In my free time, I started to slowly learn to play classical music as a way to improve my playing, reading, and writing of music. For a roots-rocker type as myself, I found classical music not easy to play. I literally learned, played, and recorded these songs in small increments as my schedule would allow. I would work on it a bit, come back days, weeks, or even months later to work on it a little bit more. It was a very interesting pursuit and a lot of work.”

In full disclosure, the songs were not actually played on a real pipe organ. They were played using a pipe organ plug-in compatible with Jimmy’s home recording system.

“Musica ex Mortuis, Vol I” will contain 8 classical performances, with a release date of Oct 7th,  2016 which ties in with the Halloween season. Many listeners will be surprised with how familiar much of this music sounds to them. “There is a lot of spooky music in the classical genre that has been used countless times in radio, television, and film as well as in advertising.”

Jimmy Psycho is the main mind behind the long-running “Horror Rawkillbilly” outfit Psycho Charger and the wildly popular “spooky sci-fi punk rock lounge band” The Jimmy Psycho Experiment. He has written songs for horror films, his most recent contribution being the theme songs for the hit Halloween anthology film “Tales of Halloween”. He is currently preparing to record his first solo roots-rock record which exposes his life-long love of country, blues, and traditional American music.

There are no plans for “The Abominable Dr. Psycho” to perform live.