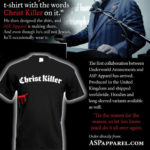 In his lecture The Great Satan, Satanic priest Kevin I. Slaughter discussed his love of iconoclasm.

“If I were Jewish, I’d occasionally wear a t-shirt with the words Christ Killer on it.”

He then designed the shirt, and ASP Apparel is making them. And even though he’s stillnot Jewish, he’ll occasionally wear it.

The first collaboration between Underworld Amusements and ASP Apparel has arrived.

Produced in the United Kingdom and shipped worldwide. Hoodies and long-sleeved variants available as well.

‘Tis the reason for the season, so let ‘em know you’d do it all over again.