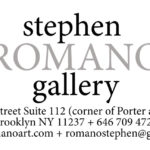 May Exhibits at the Stephen Romano Gallery

“Matt Nolen: When Grasp > Reach” and

(The End of Things)

​Deirdre Sullivan-Beeman a self-taught figurative and contemporary surrealist painter who integrates modified oil and egg tempera techniques of the 14th century Old Masters and the genre of magic realism to create pieces that appear to glow from within.Sullivan-Beeman uses her personal dream journal to inspire her artwork, exploring Jung’s collective unconscious with an overt curiosity for the bizarre and the esoteric, especially alchemy and the tarot. Sullivan-Beeman is based in Los Angeles, where her work has been shown at Corey Helford Gallery, La Luz de Jesus Gallery, and Gabba Gallery. Her show with the Stephen Romano Gallery is her first solo exhibition in New York City.

Nyahzul C Blanco is a self-taught multi media artist born in Bogotá, Colombia and based in Brooklyn, NY. She has been actively creating,  exhibiting, and curating for over a decade across the U.S. in Los Angeles, Orlando, Detroit, New York City, Las Vegas and in her hometown of Bogotá. Currently she is the Associate Director of Rabbithole Studios in Brooklyn. Her complex personal works evoke magical and romantic narratives that explore the many facets of femininity, darkness and light within, and finding unity between the two. Her photomontage series AETHER, named after the element of unity that combines all five elements – Fire, Earth, Air, Water, and Aether itself, further explores these concepts in the female figure. The Pythagoreans (Greek Philosophers) honored Aether by embracing the Five-Pointed Star as their most sacred symbol. These photomontages are the exploration of the sense of self and awareness of the body (Earth) and spirit (Heaven) and their unity, as well as what exists beyond human awareness. The Element of Aether (Spirit) is the celestial energy that fills all spaces, being the conduit between our soul and our bodies. This is a search in unifying light and darkness and to understand their opposing natures as one being as well as their vital spiritual energy.

Nolen has been awarded a New York Foundation for the Arts Fellowship, Mid Atlantic Foundation (regional NEA) Fellowship and international residencies in Israel and China. His residency at the Kohler Co.’s Art/Industry Program resulted in a handmade public washroom that has been named “Best Restroom in America” by the Cintas Corp. and among “The 10 Best Bathrooms in the World” by the Travel Channel.He has recently served as President of the Board of Trustees for Watershed Center for the Ceramic Arts in Newcastle Maine and is Adjunct Professor of Art at New York University and Ceramics Area Coordinator at Prat.

“STATIM FINIS" (The End of Things)

Stephen Romano Gallery is pleased to present The End Of Things – STATIM FINIS, a survey group exhibition featuring many of the artists that the gallery has exhibited, both contemporary and historical as well as artists the gallery is looking forward to working with in the future. The Gallery’s mission has been to blend together the masters of outsider art such as Charles Dellschau, William Blaney, Henry Darger, Martin Ramirez, Darcilio Lima among others with contemporary, historical, vintage folk and photography and vernacular art as well as works of Esoteric art.

This exhibition will continue to perpetuate that vision, as the final planned exhibition curated by Stephen Romano in the Bushwick gallery space, (with plans to relocate after August 2016), thus a melancholic sense of ellipsism* is driving the exhibition, uncertainty of the future and contemplating about effects of past efforts.

*“Ellipsism”: n. sadness that you’ll never be able to know how history will turn out, that you’ll dutifully pass on the joke of being alive without ever learning the punchline—the name of the beneficiary of all human struggle, the sum of the final payout of every investment ever made in the future.