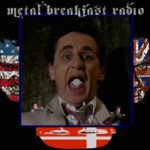 No Bob, but Kent is here – as well as “The American” so it’s a fun show. This is a continuation of the last time the boys from MBR were out braving the sun on the roof of Ingram Towers and it’s quite apparent early on that several and/or many beers have already been either quaffed, imbibed, or osmotically absorbed. That said, there’s some constructive criticism to be had, and a particularly perfect parlay of the purloined party pieces. Or it could just be the boys talking bollocks. You decide by listening in. You can hear CALABRESE, NOMVDIC (that’s not a spelling mistake) MERAUDER (that might be, but who cares?) ALL OUT WAR, COGNIZANCE (don’t these bands own a fucking dictionary?!) HARM, BIG BUSINESS, SHEER TERROR, THE OATH, VREDEHAMMER (that’s foreign, no worries) AEON, 100 DEMONS, VANIR, MOTORHEAD, SEPULTURA, VENOM INC and AKATHARTA.