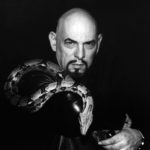 Occult writer and lecturer Mitch Horowitz reflects on his early impressions of Satanism and rediscovering the writings and philosophy of Anton LaVey.

I had once written off Anton as a showman and gifted musician with a instinct for the (virtual) kill. I saw his theology as little more than a secularized bastardization of British occultist Aleister Crowley, with a side of Ayn Rand’s Objectivist ethics and will-to-self thrown in. I was wrong.

As I recently discovered in cultural critic and occult explorer Carl Abrahamsson’s stunningly insightful forthcoming study Occulture, Anton had a more fully developed philosophy than I had realized, and he wrote with a depth and wit that has gone under-appreciated.

Read the full article at his Real Magic Medium blog.