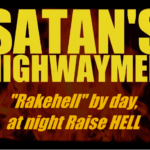 SATAN’S HIGHWAYMEN is a fictional tale of an early 18th century band of Highwaymen(/women) who were executed at the gallows – but not before having secured immortality after signing a pact with the Devil. It’s a bit of period romance set to the Grindhouse action/ Sleaze Rock formula for which Danse dE Sade is known!