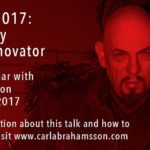 Already in The Satanic
Bible, Anton LaVey had shown considerable creativity. Concepts like ”Psychic
Vampire” and ”The Balance Factor” soon became household terms in America and
the rest of the world. His description of the ritual space as an ”Intellectual Decompression
Chamber” also hit home outside the strictly Satanic perimeters. As did the
slightly later term ”Occultnik”, signifying a person who is lost within old
structures of occultism without being able to see what’s really of use on a
practical, material level. LaVey’s initial key works, The Satanic
Bible and The Satanic Rituals, are great examples of creative
appropriation and reformulation. But the two volumes of essays and maxims that
followed much later, ie The Devil’s Notebook and Satan Speaks, genuinely
contain the essence of LaVey’s wit and creativity. In these books, we find many
fascinating topics: the integration of emotionally resonant music, stressing
the ego, encouraging a sense of humour, artificial human companions, the total
environment, a re-evaluation of slavery, the archetype of the villain, the
third side of truth and much more. Join me for a darkside trip into the Satanic
mind of Anton LaVey – magical innovator!

After the lecture there will be
an opportunity for a Q&A/discussion.

To take part of this
lecture/webinar, please send $18 via PayPal to: carl AT carlabrahamsson DOT
com. After you have paid, I will send you all the relevant
information/links. The number of attendee “seats” is limited, so please
act fast.

More on the OCCULTURE webinar/lecture series 2017:

Art, magic, and the occult have
been intimately linked since our prehistoric ancestors created the first cave
paintings some 50,000 years ago. As civilizations developed, these esoteric
forces continued to drive culture forward, both visibly and behind the scenes,
from the Hermetic ideas of the Renaissance, to the ethereal worlds of 19th
century Symbolism, to the occult interests of the Surrealists. In this
lecture/webinar series exploring “occulture” – the liminal space where art and
magic meet – I reveal the integral role played by magic and occultism in the
development of culture throughout history as well as their relevance to the
continuing survival of art and creativity. Blending magical history and
esoteric philosophy, I look at the phenomena and people who have been seminal
in modern esoteric developments.

My book Occulture – the unseen forces
that drive culture forward will
be published by Inner Traditions in March 2018. You can preorder the book HERE!