The film Hail Satan? has nothing to do with the Church of Satan nor the established religion of Satanism which we founded and have represented for over half a century. The primary subject of the film, The Satanic Temple (TST), is a political activist group which originally claimed to practice devil worship. Neither their member’s actions, nor this film, should be taken as an accurate representation of the religion of Satanism.

Moreover, we do not believe this film is an accurate representation of TST. Penny Lane, director of Hail Satan?, has stated that she feels “very aligned with/allied with TST’s mission” and has admitted to omitting recent relevant story lines that reflected poorly on the organization. While Hail Satan? was being produced, the woman at the center of TST’s Missouri abortion lawsuit—arguably the largest legal issue with which this organization is involved—removed herself from the case, claiming abuse and harassment from TST’s legal team and this case was dismissed by the court. Additionally, several chapters in the US and EU along with high-profile members departed TST, citing sexism and an abusive organizational environment as well as political differences in public statements. Lane stated that, while she filmed around these conflicts, and in her words they were “important” and “interesting,” she ended up cutting them from the final film as they didn’t align with her “artistic goals.”

Lane, who joined TST upon concluding her film, has stated that she does not consider herself a Satanist. TST representatives have previously confirmed that members do not need to be Satanists, they can “just be a strong ally who believes in the political and secular actions” TST is undertaking. Unfortunately, Lane’s movie perpetuates this confusion by referring to TST members collectively as Satanists, and their actions reflective of Satanism with no clarification or context. This is a critical factual error. Lane was informed of this when she interviewed our clergy member and representative, Magister David Harris, for the film. This interview would have added historical details and explained the philosophy of Satanism—which long predates TST, but the footage did not make the final cut of the film as possibly this important context also didn’t align with Lane’s decision to create an uncritical promotional piece.

With Hail Satan? Lane had the opportunity to accurately explore the facts regarding the widely varied experiences of those involved with TST, and perhaps tell a more complex story about media and publicity manipulation, mob mentality, and how the same public and journalistic knee jerk reactions to “the S-word” that enabled the Satanic Panic are now being weaponized by political activists. We find it unfortunate that she instead chose to take a group, who at one time self-described as “a darker Yes Men,” at face value, presenting their talking points unquestioned. The resulting film is a blatant misrepresentation of a very real religion, and will cause embarrassment and confusion for its numerous practitioners the world over. Lane’s film shows in part how Satanism has been misrepresented in the past, so it’s disappointing that she chose to continue doing precisely that in this piece.

The irony is not lost on us that, while TST sued Netflix claiming misrepresentation in the show “The Chilling Adventures of Sabrina,” Hail Satan? essentially occupies that same space—entertaining to some audiences but a completely fictional representation of Satanism. It is our hope that anyone who finds themselves curious about our religion will be more discerning and will look into both the official canon and decades of literature and interviews on the subject, rather than making assumptions based on this propaganda film. 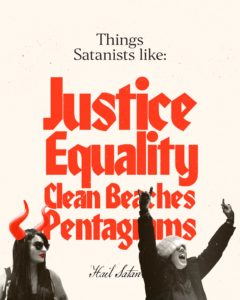 Marketing image mispreresenting Satanists and Satanism. Satanism recognizes there is no such thing as equality. 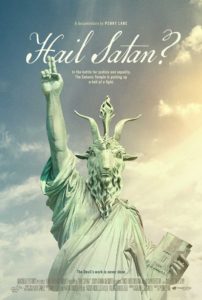 Official movie poster for “Hail Satan?” that correctly refers to TST and not generalized as Satanists. 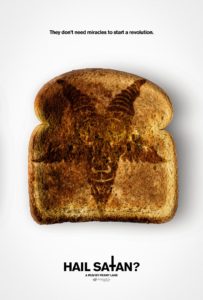 Marketing image using a version of our logo, and misrepresenting Satanism by suggesting Satanists want a revolution. 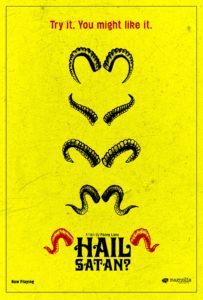 Further information about:
– About The Satanic Temple
– About the religion of Satanism