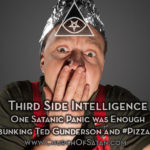 One Satanic Panic was Enough—Debunking Ted Gunderson and #Pizzagate

If you want to look really stupid, just try linking Satanism to this #pizzagate nonsense.

This old video of Ted Gunderson has resurfaced and people who live in a “post-fact” world are passing it on as some kind of smoking gun. Luckily for the non-brain dead among us this has been well documented as a load of crap. Ted

of course, was a total tinfoil hat lunatic and embarrassment to the FBI, whom the SPLC described as someone who “never met a conspiracy theory he didn’t believe.”

In the video circulating, Gunderson talks of links between the Illuminati, pedophilia and Satanism. This is as based in reality as his belief that aliens flew UFO’s to earth to give US Government the cure to Down Syndrome but the government is withholding it from people as a form of population control. If only that was a joke—it’s not.

Illuminati? No. The only documented Illuminati that has ever existed, ceased to do so in the late 1700’s.

Pedophilia? No. Not only is harming children specifically forbidden in our 11 Satanic Rules of the Earth, but also, while Satanism has always explicitly condoned all forms of sexual expression, it has always been only to those interactions between consenting adults. When it comes to pedophilia, the Roman Catholic Church has spent vast sums of money protecting pedophile priests and made continued long-term efforts covering up their crimes while allowing continued abuse of children under their supervision. The Christians must own that one and this continued deflection is as transparent as their holy water—and just as useless.

Gunderson’s overall schtick, that’s been debunked repeatedly. Here’s the full FBI files from the investigations into all of Gunderson’s abuse and kidnapping claims showing they were completely baseless and not a single victim could ever be identified. Shock TV host Geraldo Rivera, who trumpeted much of this madness, even later recanted and apologized for helping it, noting that it was all obviously fabricated and that he was terribly wrong.

That was in 1995. So, if today—more than 20 years later—you believe and parrot any of these fallacies you are broadcasting to the world that you are not only a simpleton, but a gullible idiot as well.