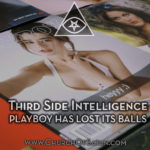 PLAYBOY HAS LOST ITS BALLS

It just has to be said. Cancel your subscriptions to Playboy magazine. Now!

The latest safe-for-work issue is on newsstands and it is the first in history without female nudity. As a former executive for the company, I can only describe my reaction as nauseated. But more disturbing to me, as a long-time true believer in what Hugh Hefner created as the ultimate sophisticated magazine for men, I admit, I’m also saddened.

Not only is the nudity gone, but the beard-wearing millennial nerds who run the magazine have eliminated the classic cover tagline “Entertainment For Men,” clearly signaling total acquiescence to politically correct feminization and frankly a lack of balls (“My girlfriend thinks it’s sexist” – ugh!). The jokes page is gone, too. Oh, men today are too “cool” to laugh at the old one-liners and salty limericks. So Rodney Dangerfield and a host of Friars Club legends aren’t funny anymore? The humor may have some grey on it, but it’s classic and timeless! It’s downright arrogant to think men of today can’t relate. So what’s funny now, pathetic self-deprecating loser humor the likes of Louie that makes boys feel better about themselves? That might explain it.

Playboy’s management told CNN it had a couple of hundred magazine cancellations since the non-nudity announcement. Come on, it’s more like a couple of thousand or more in what is a continually declining reader base that’s a result of millenials not reading anymore, NOT because they don’t relate! And what’s astounding is that this “brain trust” is positioning the new Playboy in the Vanity Fair category—a magazine that firmly targets WOMEN!!

Face it; Playboy’s excellent reportage and literature had widespread exposure thanks to the eye candy with which it was packaged. Millions of men would never have known the works of major authors if it weren’t for the T&A that brought them into the publication.

Another disturbing announcement came recently when Playboy said it’s selling the Holmby Hills Mansion. As someone who met Hefner, walked the halls of Playboy’s offices and knew intimately the pedigree and philosophy of the company, it makes me think the new management team somehow got a few decisions past the 89 year-old Hefner.

I can go on and on about Playboy’s justifications for the changes: there’s too much nudity on the Internet to compete, the magazine needs to be less explicit to gain advertisers (frankly insane in a society that now embraces nudity on cable TV like never before), and finally that young men simply don’t relate to it anymore.

Well, there is a real reason contemporary “men” don’t relate to the magazine anymore. It’s because many have been whipped into embracing ultra-feminist political correctness in order to be “liked and accepted” by women their age. They’re now afraid that if they embrace Playboy’s former DNA promoting love, romance and, yes, SEX as the greatest pleasure a man could find, then that thinking somehow objectifies women and they’ll then be shunned, missing out on what they really want—to see their girls nude and to get laid! There was a reason Hefner adopted the “fuck like a bunny” rabbit as its symbol. And I’m afraid the rabbit has died.