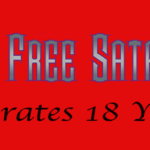 Founded at the turn of the millennium in 2000,

established itself as one of the earliest online radio networks in the world, and the first with shows from a Satanic perspective. RFS’s DJ roster was composed of several members of the Church of Satan, each one bringing to the network their own tastes and interests with weekly broadcasts. Over the many years RFS experimented with a broader roster, with hosts and managers coming and going.

With over a dozen active shows our devilish DJs curate the best in Metal (Metal Breakfast Radio and Metal Invaders), 80’s/New-Wave (The Metro), Goth//Punk-Rock (Furious Sound and Dark Whispers), Classical (Vox Satanae and The Devil’s Trill), Ambient/Noise/Industrial (Chaos Sedated), Psychobilly/Rockabilly (Clint Mephisto’s Shit Kickin’ Road Show) and more. It’s not all music; some of our most popular shows include Comedy (The Devil’s Mischief), News & Social Commentary (Confessions of a Wicked Witch and The Accusation Party), and The Spoken Word (Satanic Story Time and Dark Voices).

The Compleat Story of The Compleat Witch by Magistra Peggy Nadramia, High Priestess of the Church of Satan