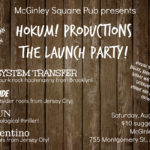 Hokum! has transformed from a Sunday showcase into a production company, and the launch party is Saturday, August 19th in Jersey City. Doors are 7pm at McGinley Square Pub, and the launch party will feature Out of System Transfer, Darren Deicide, Bible Gun, and Gina Tolentino. The MC and guest deacon of the night is Jersey City writer and comedian, Melissa Surach. There is a $10 suggested donation.

Hokum! began as a monthly Sunday showcase in the back room of McGinley Square Pub, a Jersey City craft beer bar that was saved from abandonment in 2015. Its trademarks were fully acoustic, down home shows where the gap between performer and audience was bridged with energy. International, national, and local touring musicians from the alternative roots scene graced the stage, and as shows became larger, Hokum! transformed into Hokum! Productions, now prepared to feature new, alternative, and strange roots music and culture. Hokum! Productions is “Music that is built to last, and people that are going to hell.” Unique and formal attire is always encouraged.