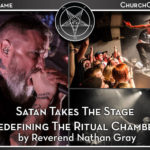 by Reverend Nathan Gray
an article for The Black Flame—May, LI A.S.

Art, music, and philosophy are the great culmination of
Greater and Lesser Magic. They are the foundation for great war and great
peace. They are what calls us to our own living ritual chamber, and beckons us
to live!

Satanism does not insist
that each of us utilize Greater Magic, but it is most certainly encouraged.
Greater Magic empowers us each to actively take our reins and steer ourselves
down our paths in a way that no other religion gives its members the power to
do. Through ritual magic, we can purposefully set our minds and hearts to
actions that benefit us. I try to focus not on moving the outside world with my
Magic, but commit to strengthening myself for, against, or releasing myself
FROM the outside world.

Every Satanist is a unique vessel through which the
application of Ritual is moved. For some of us, catharsis comes from carrying
out the methodical steps laid out in the Satanic Bible and Satanic Rituals. For
some of us, maximum catharsis is achieved by ritualizing in a personalized
manner best suited to who we are and what we do.

For me, that action manifests through my music. For over 20
years now, songs are where I have thrown all of my emotions, spun them into
art, and expelled them through my live performance.

In a manner of sensory tantalization alone, a concert is all
encompassing for both myself AND my audience. The environment is abuzz with
sight, sound, smell, and even temperature. All of these elements marry to
create an atmosphere that is absolutely incomparable to any other time and
space. Within that ritual chamber is, for me, the most important element of
all: the energy of an audience.  I invite
everyone who sees me perform to become a part of the ritual, rather than just
watching it. Hungrily feeding off each other in purposeful chaos, I end up
leaving that stage a changed man, every single time. That union of fantasy and
light is special. It is MAGICAL. It creates the perfect environment for
emotional release, and for the celebration of our most primal selves.

This Walpurgisnacht, I had the exhilarating honor of
performing that ritual of music with a room full of people who truly understand
what I do for its unique catharsis. In a spectacular display of elegance,
carnality, and distinction, the Church of Satan celebrated its 50th Anniversary
with a Conclave held in New York, during which Nathan Gray Collective played a
show in front of Satanists from all over the world. We gathered in an exquisite
room illuminated in crimson, and dined like royalty. After indulging in the feast,
I took the stage to sing in front of some of the most powerful magicians in
existence. It was most certainly one of the most intense and memorable shows of
my career to date.

I encourage each of you to think outside the
box, and play with Ritual a little. There is no “right” or “wrong” way to
utilize Greater Magic–only your way. Find what combination of elements brings
YOU maximum catharsis. Ritual is less about following steps in a book, and more
about a Satanist making their own magic within themselves, so that they can be
their best and exist in that vital life that only a Satanist can make. You are
the highest power. You move mountains and you part waters. Ritual is one of the
most powerful tools to clear your way down that path.