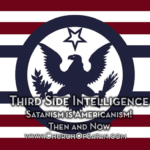 Satanism is Americanism! Then and Now

On this upcoming Independence Day some of us will look back at these words by our founder Anton LaVey and reflect on what’s changed and what remains the same. After being confronted with the factions vying for influence over our society, many conservatives have unfortunately chosen God over The Flag, betraying the clear secularism of our Founding Fathers. Our nation again finds itself in a struggle between partisan extremes from which I trust a new clear-thinking generation will arise to cut through and find a Third Side, embracing and continuing the progress we’ve made towards individual freedom while questioning hypocritical religious morality.

To sum up our political doctrine: Satanism IS Americanism in its purest form, with only the outdated moral codes altered to fit the times, and with recognition of the fact that only if man’s most basic instincts are satisfied can a nation receive his best. When it becomes common knowledge that we do not advocate or even approve of denial or desecration of such sacred American traditions as home, family, patriotism, personal pride, etc., but instead champion these things, our one-time opponents in “The Establishment” will not have a leg to stand on.

Actually, in view of the vast numbers of religious leaders defending and expounding the extreme liberal philosophy of the hippie or drug culture, conservative organizations will (and already do) find Satanism far more compatible with their doctrines than they now think it to be. I feel rather sorry for (but, I must admit, amused, by) the poor old “dyed-in-the-wool” con­servative who considers The Flag and God to be in­separable institutions, because the “New Christianity” is composed of the drug-befuddled wretches they find totally reprehensible. It looks as though one is going to be forced to choose between God and The Flag, or else become part of a dying society. I realize most would think me far too optimistic, but I can simply see the change coming.

I think back just five short years ago, when I formally founded the Church. How many theologians were admitting to the irrationality and inconsistencies of their religions? Practically none! And once the stern, unyielding Christian Churches have admitted their errors, they might as well admit to defeat.

It is in young people such as yourself—proud walkers of the Left-Hand Path—whom I place my faith for the future of this, our fair land. America shall, indeed, have a bright future, once she has “weathered the storm” of those two opposing factions who respectively hate and love her, but would see her torn asunder in order to prove their respective points.

Love for one’s country must be shown in much the same way as love for another person. We must be able to see her faults and work towards changing them, without robbing her of all pride and dignity in the process. On the other hand, we must not blindly accept her faults and constantly make excuses for her, for that is not love—it is infatuation!

On Third Side Intelligence our articulate members present to you their individual commentary on current events, media, politics, and culture. Their views and opinions are their own and may not reflect those of other members of the Church of Satan.