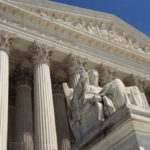 I applaud today’s announcement that same sex marriage is now legal throughout our entire nation. The philosophy of the Church of Satan has supported this principle for many years. The Satanic Wedding Rite I published in my book The Satanic Scriptures in 2007 acknowledged that “In Satanism, the basis for a couple forming a union is the loving relationship they have created. It does not matter if the couple is of the same or opposite sexes.” Our clergy has been proud to wed both same sex and opposite sex couples equally. In 2013, Magister Netherworld was the first Satanic clergyman in New York State to legally preside over a same sex marriage and we expect that there will be many more such rites nationwide with this properly recognized civil right.

Justice can prevail over bigotry, though it can be long in coming. This decision trounces the theists whose ends are to force others to conform to their antiquated barbarisms. Today, secularism and sensibility have prevailed over the arrogance of faith-based oppression. Bravo!

This is a victory for those who favor an equitable liberty for all U.S. citizens—and that is worthy of celebration!