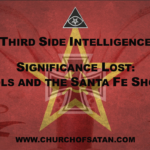 Dimitrios Pagourtzis, the young man identified as the shooter in today’s horrific crime at the Santa Fe High School, apparently wore a mix of incongruous symbols on a vest, one of which seems to be a version of our Sigil of Baphomet. He is not a member of the Church of Satan and note that we don’t accept minors nor do we support the religious indoctrination of children. While symbols can be a statement of allegiance to particular beliefs and practices, when worn as decorations they are often employed by the wearer to mark what is currently trending in one’s peer group, not to represent anything more meaningful. Many individuals sport crosses of various sorts, sometimes along with symbols of ethnic ancestry, but these do not indicate that there is any doctrine being proposed by the wearers. They just like the look of the trinkets. And you’ll find this practice to be common amongst those who are law abiding and those who are not.

The Church of Satan, founded in 1966 by Anton Szandor LaVey, employs a pentagram symbol which includes a stylized goat face encircled by the word Leviathan in Hebrew. This emblem represents a law and order philosophy demanding that its adherents must be responsible for their actions and should deal with one another justly—and regarding those who are criminals, that the punishment for their misdeeds should fit in kind and degree the crimes committed. Now, over 50 years later, this symbol has been through a bastardization during the proliferation of Metal music to be diluted to a vague icon of rebellion. Today there are mass-produced variants of it crowding the shelves of trendy, youth-oriented mall stores as jewelry items or on t-shirts. The purchasers see it as just another cool adornment to pin to a vest or wear on their backs, either to fit in amongst or piss off others with whom they socialize. Like hip and edgy t-shirts in the past emblazoned with images of Mao, Lenin, Einstein, Ché Guevara, and other iconic figures, the wearers are typically not cognizant as to whom these individuals might have been, let alone what ideas they championed—these are just pre-packaged fashion statements, not sworn allegiance to any political or religious ideologies. Some might be perceived as providing ready made “good guy” or “bad boy” cred—that’s the actual shallowness of such gestures.

Pagourtzis mixed a German Iron Cross (used by their military as a high honor but later typically part of biker sub-culture attire), a Soviet Hammer and Sickle pin (ostensibly representing Communist doctrines), and a cephalopod which is being dubbed Cthulhu (a chaotic alien god from Lovecraft’s horror tales), a pocket watch, and a rendition of what we call the Sigil of Baphomet. The actual ideas, philosophies and practices behind these symbols are not in any way consistent with one another and the purpose for this assemblage seems to have been to offer a sort of loose rebellious sensibility, as all of these icons have been demonized by society over time.

At this point little is known about Pagourtzis’ situation and what prompted him to take this heinous course of action. We have yet to discover what meaning any of these objects might have had for him, whether he understood them or not. When addressing the Columbine tragedy of 1999, I wrote words which might prove as applicable to Pagourtzis as they are to Klebold and Harris:

“One thing might have helped defuse the situation: Satanism. If Klebold and Harris had understood real Satanism and chosen to live by it, their vengeance spree would not have happened. Satanism would have taught them that, indeed, they were not like these others, and that such is a positive attribute. Satanism would have taught them that they had only one life, and that their intelligence and talent would take them along paths which would lead to their drinking deeply from that cup which is offered but once. They would have known that Satanists practice Lex Talionis, making the punishment fit in kind and degree the crime.”

We Satanists mourn with those who are the family and friends of these victims, for we understand that life lost is not to be regained. May we find the ways and means to understand and help those disturbed individuals who decide they have no other recourse than murder to solve whatever they perceive as intolerable stress. Taking positive action to prevent such situations in the future should be a goal we can agree upon as a society, regardless of whatever religious or political perspectives we might hold.