“A cynic’s book that annoyed me.” – Leeds Mercury. 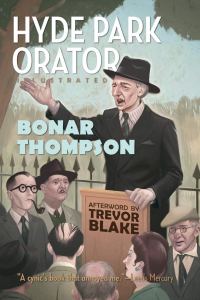 Bonar Thompson, the famous Hyde Park Orator, delighted millions of listeners at the well-known meeting-ground for many years with his dramatic personality and oratorical flights. This book, which is the story of his life, is a veritable human document. Born in Ulster to poor parents, left to struggle for himself at an early age, lacking any formal education and obliged to labor in the fields. Bonar Thompson began quite early to exhibit those unusual qualities of mind and character that have made him the social rebel he is. He describes how he taught himself to become a public speaker, threw in his lot with revolutionaries, went to prison in Manchester as an agitator, and finally lost faith in all political theories. He has some pungent things to say about his ex-comrades in the Labour and Socialist movements as well as some interesting stories about many famous men and women whom he met in the course of his very varied career. His appreciation of Shakespeare is on par with any academic.

Hyde Park Orator Illustrated by Bonar Thompson is a most unusual book and is full of entertainment from beginning to end. Newly typeset and expanded autobiography of the greatest free thinker ever to grace Speakers Corner.

With illustrations, index, bibliography, and an afterword exclusive to this edition.