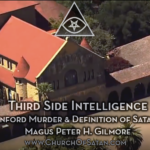 His definition of a satanic murder? “It would have to be committed by two or more people to have some kind of a spiritual or religious connotation, you have to have multiple people involved,” Lanning said.

This definition ignores the importance of determining from what religion the “spiritual or religious” connotation has arisen. Satanism is a carnal, not a spiritual, religion. Our principles are against rape and murder. Even if someone misappropriates our symbols for use in a crime, it does not make the murder “satanic.” The crime here took place in a church, thus the body was surrounded by Christian symbols—why is it not then considered a “Christian murder”? The answer is because in a Christian context, anything they don’t like is blamed on The Devil—the scapegoat—even if a killer is a Christian.

If a crime was committed in a shrine or temple or sacred grove, would law enforcement immediately define it as under the aegis of the religion of such spaces? Again, if those defining it are Christians, they won’t. While non-Christian religions to them are already suspect, when the Jesus-lovers are in an ecumenical mode, they consider other common major religions to be supportive of positive behavior and thus again such crime is blamed on The Adversary. Today Islam, because of its radical sects, is now an exception and does get blamed for terrorist murders. When the terrorists specifically claim their interpretation of Islam as their motivation, the commentators can hardly blame it on “satanists.”

Since Satanism has been clearly defined as a religion for over 50 years, the perspective discussed here is an outmoded one that existed prior to the founding of the Church of Satan. And of course it is one still promoted by bigoted Christians in news media and law enforcement as well as sensationalist “journalists” such as Maury Terry who sell books based on that “Satanic Panic” legend which had claimed that there are murderous groups of Satanists lurking about and organizing killings. That nonsense has long been debunked, and the ABC article should bring that point up, rather than revive the idea unchallenged. Sloppy thinking, lack of research and sloppy writing abounds here.

If someone killed someone as an intended sacrifice to some supernatural entity, then the blame should be on the belief system that promotes the reality of said entity. Satanism is an atheist religion so sacrifice has no role in our philosophy nor our practices. There are plenty of reasons why people’s religions have nothing to do with their crimes—the motivations of murderers are myriad and primarily are not based on the concept of sacrifice, regardless of the professed religion of the killer or victim. Human greed, jealousy, anger, stupidity and hatred are all far more plausible causes than mythical murderous worshippers of fictional devils or deities.