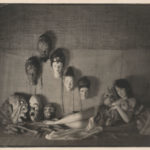 The exhibition celebrates Dia de los Muertos (Day of the Dead) 2017 and All Hallows’ Eve (Halloween) 2017 by curating together some of the most celebrated contemporary and historical artists whose subject is the art of the esoteric, the old ways and folkloristic magic.

The exhibition will feature a selection of newly discovered and never seen before photographic works from the 1920’s by William Mortensen, whom Ansel Adams dubbed “The Anti-Christ”. These works were unseen for the past 80 years and originate from the artist’s first wife’s estate, and are exclusive to Stephen Romano Gallery. Pictured above is a photograph William Mortensen took of actress Fay Wray which once discovered by Faye Wray’s devout Mormon mother, she had him smash all the glass negatives and had Mortensen excommunicated from Hollywood. Pictured below is a suite of three photographs demonstrating Mortensen’s mastery of the projected image, The work depicts" Lucifer and the Lost Souls in Hell", each figured has been projected onto the paper individually. This work has never been exhibited before.

The exhibition also presents for the first time ever a suite of Spirit photographs and associated ephemera from the renowned CAMP SILVER BELLE, a Spiritualist summer camp situated at Mountain Springs Hotel in Ephrata, Pennsylvania. In her séances camp leader Ethel Post-Parrish claimed to materialize her spirit guide an Indian girl known as Silver Belle, which were discovered to be fraudulent mediumship, and had been exposed in various newspapers. Before exposures, the camp took in up to a million dollars a year from aristocrats from the east coast who sought out a spiritual experience. The photographs taken by Jack Edwards are exhibited for the first time ever.

VERY SHORT RUN – October 30 – November 4 (the blink of an eye, like eternity itself.)