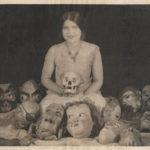 WILLIAM MORTENSEN + THE COVEN OF THE SIBYLLINE

Stephen Romano Gallery is thrilled to announce the exhibition “WILLIAM MORTENSEN + THE COVEN OF THE SIBYLLINE” in association with The Living Gallery Outpost in New York City’s East Village, with an opening reception Saturday November 25th from 6 – 9pm.

The exhibition will feature newly discovered and never seen before works by American cultural treasure WILLIAM MORTENSEN, also renowned as the Father of Pictorialism, an international style and aesthetic movement that dominated photography during the later 19th and early 20th centuries. The art of William Mortensen has in recent years seen a revival as the artist has been celebrated as seminal in the art of manipulated photography and gothic subject matter.

Most of the works by Mortensen in the exhibition are newly discovered, from the collection of his close friend and associate Quenton Bredt (to whom Mortensen bequeathed his own personal collection) and from the estate of his first wife Courtney Crawford, and have never been exhibited in public until now.

William Mortensen (1897 – 1965) was an American Photographer, primarily known for his Hollywood portraits in the 1920s-1940s in the pictorialist style.

“Ansel Adams called him ‘the Antichrist’ and wanted him written out of history. But William Mortensen’s grotesque photographs of death, nudity and torture and are now having their day.. A monograph on the artist was produced by Feral House in 2014 to great acclaim, including major articles on the artist in The Guardian, The LA Times and The Smithsonian. In addition, many exhibition have included the art of William Mortensen, including "American Grotesque” at Stephen Romano Gallery, as well as exhibitions at The Museum of Old and New, Scope Art Fair, The Metro Show, The Outsider Art Fair, as well as a major solo exhibition at the Dark MoFo Festival curated by Barry William Hale in 2018.

Mortensen’s methods often made it hard to distinguish whether the results were photographs or not. He used traditional printmaking techniques, such as bromoiling, and developed many of his own. He would create composite images, scratch, scrape and draw on his prints, then apply a texture that made them look like etchings, thereby disguising his manipulations. Consequently, every print was unique. Ultimately, Mortensen’s aim was to create something that, for all intents and purposes, appeared to be a photograph, yet portrayed scenes so fantastic they caused wonder and astonishment in the viewer.

More information and photos can be found at: http://lexiconmag.com/content/sybilline/