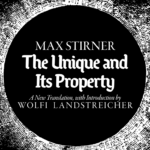 STIRNER: THE UNIQUE AND ITS PROPERTY

“Some call it The Anarchists’ Bible, others call it The Billionaires’ Bible”
—Benjamin R. Tucker

Max Stirner was branded the Devil’s advocate in 1845 because the challenge to the powers-that-be was so great. His book was immediately banned by governments, became anathema among the churches and not even the Socialists or Humanists felt safe from his wrath.

His book The Unique and Its Property was condemned as shaking the “cornerstones of all moral and social life.” And because of that it was a true sensation on its initial release in 1844 (coincidentally, the year of Nietzsche’s birth). It brought to the world a radical view: egoism, the notion that the individual is the measure of all things.

Today, more than 170 years later, marks the release of a new English translation that truly restores the authors complete vitriolic and devastating challenge to the systems that are burdening bodies of men, and the shibboleths that haunt their minds.

Where the existing translation downplayed or missed Stirner’s more biting criticisms and his humor, a new edition by egoist anarchist author and historian Wolfi Landstreicher has brought forward both the form and the intent of Stirner’s work, and delivers every “occasional crudity” and all the “playful ferocity” found in the original German.

The Unique and Its Property is still a strong antidote to moralists of the sacred and the secular alike. It is an illuminating torch to light the lonely path of the intrepid individual, not incidentally also setting ablaze every prevailing politic and philosophy.