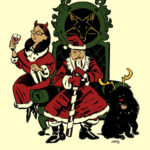 The solstice is
upon us and, as kin to the rest of Earth’s species, we feel at one with the
cycling of the seasons on this beautiful planet that is our home. Celebration
of that turning wheel comes naturally to us. Some Satanists might feel
alienated by parts of the holiday hubbub promoting Christianity, yet heathen
trappings have long been the dominant décor. Recall that the Christians lifted
this holiday from the pagans, pasting their pallid savior over more earthy
traditions which have never been vanquished. Jolly Santa Claus, who has come to
signify wish fulfillment, is a combination of Dionysos and Silenus from Greek myths.
And let us not forget that the ever-carnal Romans celebrated the orgiastic Saturnalia at this time of
year.

In practice, the Nazarene has little
place in most of the general public’s celebrations of this season—and we like
it that way. Who wants to think of that mangy manger-baby on the way to his
zombie destiny when it is far more delightful to simply celebrate the wonders
of Nature with friends and family? Festive gatherings with sumptuous food and
drink have historically been employed in the Northern Hemisphere at this time
of year to mark the now lengthening days. The Winter’s chill is understood to
be transitory, with the fecund Spring to come—certainly a proper reason to
offer “Joy to all!”

I join with all who would revel in
marking the Yule holiday season
by enjoying the fullness of our lives in the company of people whom we cherish.
We will often be the only ones who know the origins of these widely-embraced
festive traditions. It might surprise some to know that many Satanists have
decorated trees with blazing lights and ornaments that range from the
diabolical to icons of all they consider to be fun. Our own includes dinosaurs,
devils, musical instruments, pagan deities despised by Christians, Klingon,
Romulan and Federation Star Trek vessels, as well as Bugs Bunny and pals
amongst other avatars that bring us pleasure. That Germanic devil Krampus has also charmed
many of us—his purpose to mete out justice is one we consider fundamental—so
his imagery has been embraced with gusto.

Important note! The Church of Satan will soon be making announcements to its
members regarding the upcoming celebration of the organization’s 50th
anniversary on April 30, 2016 ce. Members are urged to ensure that their
current email address is on-file with our administration or you may miss a
once-in-a-lifetime opportunity. Send updates along with confirmation of your
identity to administration@churchofsatan.com. For those who are not yet members, but have been
contemplating affiliation, we strongly suggest that you submit your
applications promptly in order to qualify to receive members-only
announcements. Our upcoming 50th anniversary festivities have limited capacity.
Applications received after January 31, 2016 ce may be ineligible to receive
anniversary-related announcements. Follow this link for Church of Satan
membership information.

By the way, the above image by master
cartoonist Josh Latta
(commissioned by Citizen Milton C.
of the Raising Hell podcast—many thanks!) depicts myself and my
wife, Magistra Peggy Nadramia, as Mr. & Mrs. Satan Claws, based on an
incident I recounted to Helle Magazine
in their article “POGONOPHILIA.”
Our Chow Chow Contessa Bella Lugosi, who passed away earlier this year, plays
her part as a stand-in for the legendary Rudolf, the ninth
reindeer.

So, from our cozy lair in the haunted
Hudson Valley, we offer a “Superlative Solstice” to all Satanists and fellow
secularists around the globe for a time filled with joy in abundance!