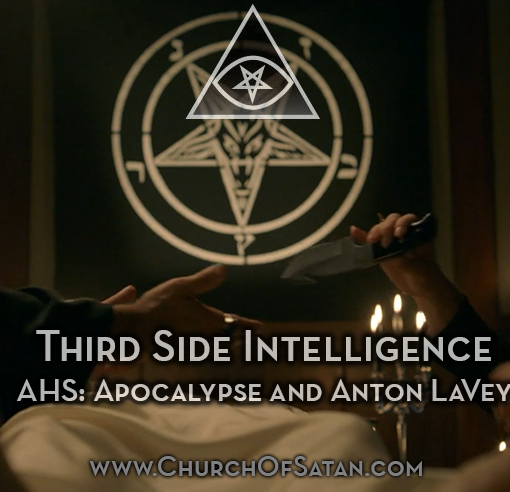 I had ceased watching American Horror Story after its third season since experiencing its incoherent plotting and inconsistent writing I found a waste of my time. Granted, there are some striking visuals and the acting of people like Jessica Lange, Frances Conroy and Sarah Paulson is exemplary (others, not so much). However, in this eighth season, a mashup of earlier seasons now spinning a yarn about the aftermath of a nuclear war caused by the Anti-Christ, I had to sit through an episode as it mentioned the organization I’ve been running for over 17 years, and its founder, Anton Szandor […]

Mitch Horowitz: Good, Clean Satanism  Occult writer and lecturer Mitch Horowitz reflects on his early impressions of Satanism and rediscovering the writings and philosophy of Anton LaVey. I had once written off Anton as a showman and gifted musician with a instinct for the (virtual) kill. I saw his theology as little more than a secularized bastardization of British occultist Aleister Crowley, with a side of Ayn Rand’s Objectivist ethics and will-to-self thrown in. I was wrong. As I recently discovered in cultural critic and occult explorer Carl Abrahamsson’s stunningly insightful forthcoming study Occulture, Anton had a more fully developed […]

Occulture 2017 Lecture/Webinar:  Anton LaVey – Magical Innovator  Already in The Satanic Bible, Anton LaVey had shown considerable creativity. Concepts like ”Psychic Vampire” and ”The Balance Factor” soon became household terms in America and the rest of the world. His description of the ritual space as an ”Intellectual Decompression Chamber” also hit home outside the strictly Satanic perimeters. As did the slightly later term ”Occultnik”, signifying a person who is lost within old structures of occultism without being able to see what’s really of use on a practical, material level. LaVey’s initial key works, The Satanic Bible and The Satanic Rituals, are great examples […]

Stephen Romano Gallery Presents: "DE DOMO DIABOLI", Opening Reception Oct 30 NYC (William Mortensen, LaVey) Stephen Romano Gallery is thrilled to announce the exhibition “DE DOMO DIABOLI” (The Devil’s House) in association with The Living Gallery Outpost in New York City’s East Village. The exhibition celebrates Dia de los Muertos (Day of the Dead) 2017 and All Hallows’ Eve (Halloween) 2017 by curating together some of the most celebrated contemporary and historical artists whose subject is the art of the esoteric, the old ways and folkloristic magic. The exhibition will feature a selection of newly discovered and never seen before photographic works […]

The Forest Passage Podcast: Carl Abrahamsson Magister Carl Abrahamsson joins Reverend Raul A. to discuss his work on the Jayne Mansfield and Anton LaVey photo book CALIFORNIA INFERNAL, his occult & outsider culture journal THE FENRIS WOLF, the art of Austin Osman Spare & John Balance, the photos of Tom Benson, the work of JOE COLEMAN, working with Vanessa Sinclair on CUT TO FIT THE MOUTH, the AN ART APART bio film series, his upcoming book OCCULTURE to be released by Inner Traditions, and much more. Listen now at Heathen Harvest Subscribe via iTunesSubscribe via Stitcher RadioCALIFORNIA INFERNAL: Jayne Mansfield […]