Ritual Magic in the Church of Satan—a Historical Perspective High Priestess Peggy Nadramia details the history of Satanic ritual magic as developed by Anton LaVey and its application in the Church of Satan. Originally published in DEVIL’S DUE: ESSAYS OF THE ELITE, Dark Moon Press (2016)  Anton LaVey had taken the practice of Satanic ritual magic from therapeutic psychodrama, developing his theories of manipulating the minds of others “through the ethers,” communing with the projection of the Self that he had determined to be Satan, at last to a form of personal magic that either bypassed the trappings of ritual, […]

Magus Peter H. Gilmore & Magistra Ruth Waytz on NPR: Satanism: Religion, Philosophy, Lifestyle Colin McEnroe talks to the Church of Satan about the core principles of Satanism, spending time with Anton LaVey, how it differs from secular humanism, and more. John Crow joins them to discuss the academic study of Satanism. Link: http://wnpr.org/post/satanism-religion-philosophy-lifestyle#stream/0

Reign in Hell: An Interview with Gost by Reverend Raul Antony a feature for The Black Flame—September, LI A.S. Over the past 10 years synthwave has transformed from a small niche genre that raised eye brows in Nicolas Winding Refn’s 2011 film Drive to record labels such as Blood Music pulling millions of views on YouTube and fans of the smash-hit Netflix show Stranger Things clamoring for a soundtrack vinyl treatment.  Heavily inspired by new wave, 1980′s films, soundtracks, and video games, the genre developed a retro-futuristic aesthetic found in projects such as Perturbator (Black Flame Interview), Carpenter Brut, Power Glove, Com Truise, and more. Among […]

THE NEW PURITANISM The latest news that comedian Mike Ward ordered to pay a $35k fine for a joke is further evidence of the new wave of secular puritanism that’s sweeping the Western World. In other news, Wikileaks sparks a thread of comments on what they call the “Cyber feudalism” of Twitter’s banning of gay libertarian Milo Yiannopoulos for speaking the ‘wrong’ way to a high profile Hollywood actress. They accuse Twitter of giving special access to a politically aligned celebrity over other users who have faced vastly worse. Minecraft creator Markus Persson weighs in as well, voicing his concern on Twitter. All […] 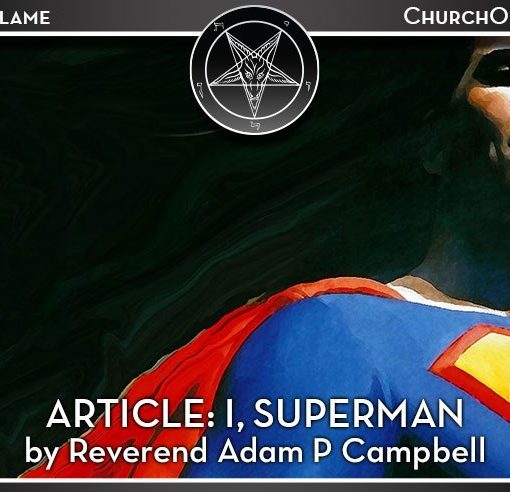 an article for The Black Flame—July, LI A.S. (Video Included) “You look up when you wish to be exalted. And I look down because I am exalted.” ― Friedrich Nietzsche, Thus Spoke Zarathustra My earliest memories center around coloring books. There was something about bringing a page to life through a crayon, marker, pen or pencil that excited me. My favorite coloring book was Superman. The way his muscles bulged as he lifted a car or the speed lines that trailed him as he raced to save someone in distress. I was a part of his experience. I literally colored […]

An Interview with James Kent of Perturbator by Reverend Raul Antony a feature for The Black Flame—June, LI A.S. I first heard Perturbator almost exactly a year ago while editing a highly rated review for Dangerous Days at Heathen Harvest. The writer described a faux-retro synthwave album that melds cyberpunk aesthetics with the neon-cool atmosphere of Drive, with an evil supercomputer named “Satan” thrown in the mix. Being a long-time fan of electronic music, cyberpunk, and the films of Nicolas Winding Refn, I couldn’t help be feel like someone formed an album specifically for me. Keeping my solipsism in check wasn’t hard. […]

THOU SHALT NOT COMMIT ADULTHOOD The Creation of the Church of Satan Playset — A Fisher Price Parody. by Warlock William J. Butleran article for The Black Flame—June, LI A.S. (Video) In my earliest memories toys have always held a special place in my heart. The designs appealed to me visually, themes and colors were alluring to my taste, taking possession of my interest wholeheartedly. They inspired a magical fascination in me. What was this sorcery and why was I so enthralled by its enchantment? I know, I know. It was a well constructed capitalist plot of companies that had researched and deployed their […]

CALIFORNIA INFERNAL – NOW AVAILABLE FOR PRE-ORDER FROM TRAPART & UNDERWORLD AMUSEMENTS Magister Carl Abrahamsson is proud to announce the debut of CALIFORNIA INFERNAL, a stunning collection of photos capturing a magical time in Anton LaVey and the Church of Satan’s history. Introduction by Kenneth Anger, and forewords by Carl Abrahamsson and collector Alf Wahlgren. Movie star Jayne Mansfield and notorious Satanist Anton LaVey met in 1966. Both were publicity conscious and made the most of the meetings, which evolved into friendship. Almost always present was German paparazzo Walter Fischer, stationed in Hollywood and catering to image- and scandal-hungry photo […]

Peter H. Gilmore – High Priest of the Church of Satan Callum Davies of Cultured Vultures interviews Magus Gilmore on topics from contemporary issues to film and even Godzilla.