Satanic Players Society presents A Banquet of Panacea Three families, whose lives have been torn apart by a serial killer, are brought together by Malakai Zhang. Their mysterious benefactor, who despite having supported them financially throughout the failed trial, still has one last offer of comfort to give them, if they are brave enough to take it. This story written by Rick Powell is included in the anthology created by Alder Strauss and Hydra M Star, Bon Appetit, Stories & Recipes for Human Consumption and is the first of three special episodes featuring material from this exciting collection. 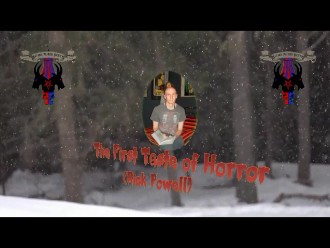 Sit down with author Rick Powell as he takes us through his journey down the dark road of horror. How in the advent of social media storytelling is a vital component for teaching and growth. He reads for us Of Man and Woman, written by Richard Matheson.

Rick Powell: Teacher, A Tale of the Macabre Adolescence is tough on young boys. It is even tougher on young Percy. On top of having a crush on a girl in school, failing his Math class, and living with an abusive father, he does not know where to turn. A tutor enters his life that holds a solution to all that, but who or what is this captivating woman and what lessons will she teach him? A horrifying tale that shows that some lessons are best learned outside the classroom. Lessons written in blood. This is the first novella by […]

(Special thanks to Rev. Thomas Thorn) I wore small shoes, And my mind was fresh, When you and I first met. Beneath a blanket, On a couch in a fever, In front of the television set. An angry wind, Rattled the windows, As I clutched that blanket in fright. On the monochrome screen, The creature appeared, Such a terrible, beautiful sight. He turned to the camera, Rocking ever so slowly, Lit only by a Stygian moon. I gasped in delight, At his dead-eyed stare, And felt myself starting to swoon. I was frozen in awe, Of what I just saw, […]

RICK POWELL: PATIENT #151 This was originally published in the April 2015 edition of Infernal Ink Magazine and Witch Hydra M. Star even offered to do an Afterword to my story which is included in this ebook version. In the story, an interview with a young, deranged, and dangerous woman could hold the key to the gruesome events on that October night. Was it some deep sexual obsession or something supernatural that led to the unspeakable? This tale has strong sexual and violent content. Not to be read by readers under the age of 18.—Rick Powell From the afterword: “A few […]

Possessions 2Featuring short stories by Authors M. R. Stover and Rick Powell This collection of short horror stories by various authors concerns ordinary objects somehow becoming fearful. It is edited by Paul Loh and David Burton with a cover illustration is by Alese Lea Taylor. Rick Powell’s story Messages is inspired by the Aklo language mentioned by Lovecraft and Arthur Machen and takes place in the modern day. Imagine if an unspeakable force was able to use the Aklo language to send messages to electronic devices that bring about the end of the world. M. R. Stover’s story The Ring […]