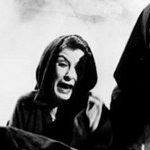 TERROR TRANSMISSION EP121: The City of the Dead

The basis of this scary tale is in reality. And the reality is that, once you check into the horror hotel, you’ll be locked in your room with two cloaked gents chanting some ungodly commentary on the 1960 release of The City of the Dead. So, before you’re sacrificed on the altar, you’ll have some time to consort with film facts, Danzig’s child-frightening forehead, metal band names in this film, “Dick"s, city vs. town, TV-watching as social curiosity, girls who wear your clothes after sex, Matt’s welding woes, Jason’s parrot traumas, the British round-pinchy-face, numerous callbacks from past episodes, the shaming culture and other savoring of heresies. So Mote It Be.

Terror Transmission is a free, monthly movie commentary podcast dedicated to classic horror from the silent era up until the late 1980s. The audio program is hosted by Jason Andreasson and Matt G. Paradise, both of whom proudly assert their enthusiasm for the show and their disdain for many others in the genre by their tagline, “The greatest horror commentary podcast… EVER!” Episodes are generally available on the 1st of every month.