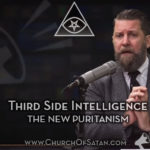 The latest news that comedian Mike Ward ordered to pay a $35k fine for a joke is further evidence of the new wave of secular puritanism that’s sweeping the Western World. In other news, Wikileaks sparks a thread of comments on what they call the “Cyber feudalism” of Twitter’s banning of gay libertarian Milo Yiannopoulos for speaking the ‘wrong’ way to a high profile Hollywood actress. They accuse Twitter of giving special access to a politically aligned celebrity over other users who have faced vastly worse. Minecraft creator Markus Persson weighs in as well, voicing his concern on Twitter.

All of which reminds me of Gavin McInnes’ video from a couple of months ago, Why far left “progressives” are the “new Victorians”. While we’re seeing a decline in a spiritual basis for our morals in the West these puritanical instincts remain, now secularized. Without a god or metaphysics as a crutch they double-down on politically correct virtue signaling in an effort to be the biggest Good Guy on the block.

In my estimation this is the real danger that Anton LaVey warned against in Point 3 of his Pentagonal Revisionism program.