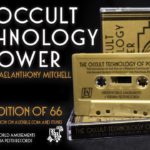 The
Occult Technology of Power

This is the programme of the one percent! First surfacing in 1974 from underground
sources, The Occult Technology of Power is a blueprint distilling the
esoteric doctrines and technics of the global elite. The publisher assumes
no responsibility for those who use this book to expose those in control—or to
join them.

“A little gem of protocol which
displays acute perception. A Satanic overview.”

“Written as if it were a set of lectures by the central philosophers
of a master conspiracy. Their personal viewpoint is rational egoism, but they
want to keep the wisdom of this perspective secret-since it is impossible to
exploit a person who maintains a self-conscious, self-interested frame of
reference…

This reviewer is very pleased with the discovery of a text we had at
first avoided because of its title. The little book is very much worth its
price.”