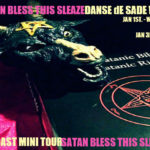 The Satanic Sleaze Rock of New York comes to the West Coast!

On January 3rd, its off to danse at Los Globos (3040 W Sunset Blvd, Los Angeles, California 90026) with Digging4Roots, Vanessa Silberman (founding mem. of Diamonds Under Fire) and Grit!

And finally, on January the 4th, they play at the world famous Doll Hut located on 107 S Adams St, Anaheim, California 92802 with Satanic Johnny, Letters to 5am, XDead-HabibX and Little Debbie and the Moonpies!