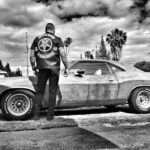 JIMMY PSYCHO is the main mind behind the long-running “Horror Rawkillbilly” outfit  PSYCHO CHARGER and the wildly popular “spooky sci-fi punk rock lounge band”  THE JIMMY PSYCHO EXPERIMENT…never a dull moment to be had as both of these music acts became known for equal parts musicanship and showmanship.

Not one to sit still for too long, Jimmy is always writing, recording, and performing music that seamlessly crosses genres with his various musical projects that range from raucous roots rock to classical music.

In addition to the currently active projects found on this site, Jimmy has written songs for horror films, his most recent contribution being the theme songs for the hit Halloween anthology film “Tales of Halloween”.

He is currently preparing to record his first solo “Hellbilly Americana” record which exposes his life-long love of country, blues, and traditional American music.